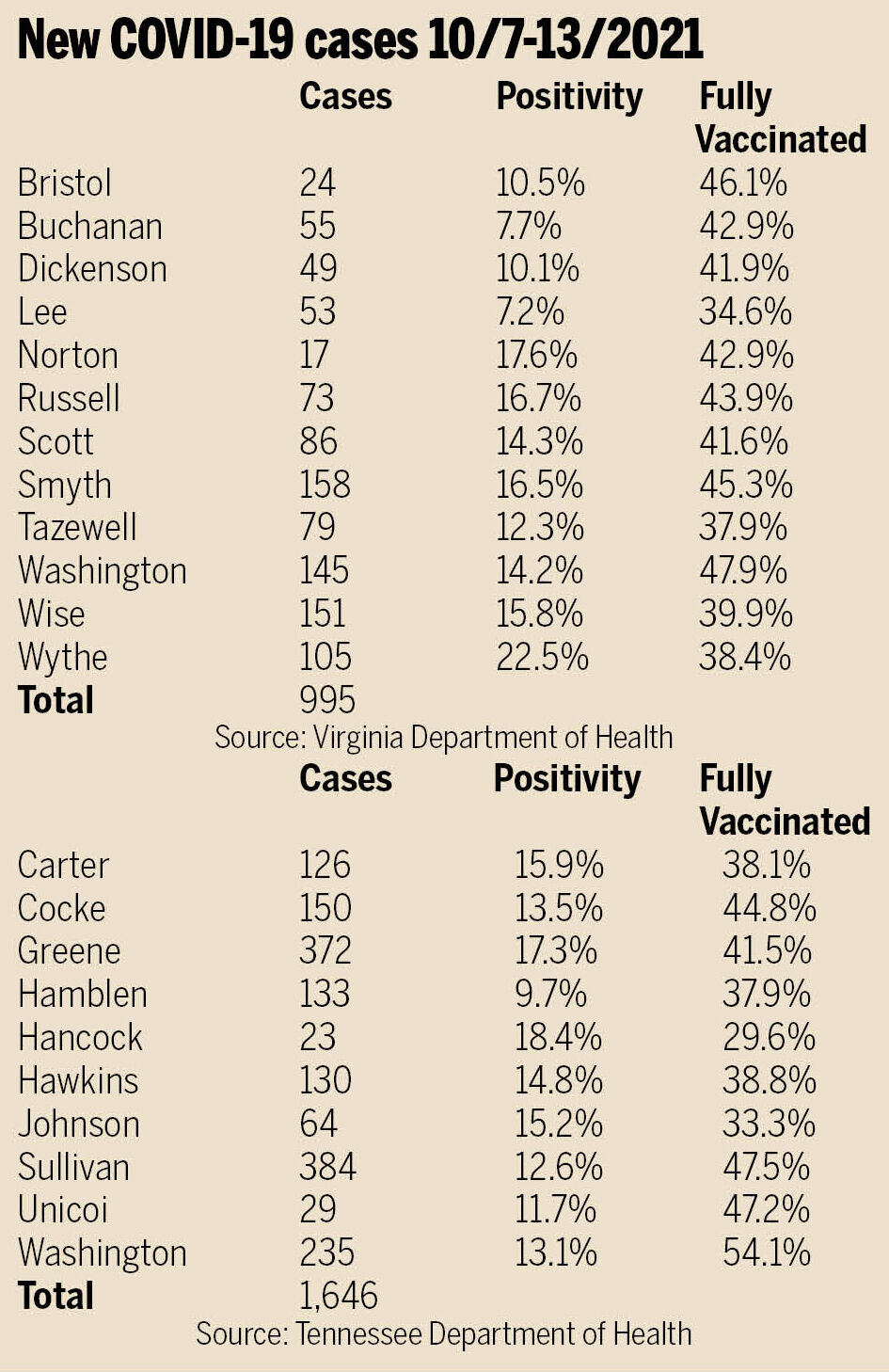 While the delta variant continues to grip this region with significant numbers of deaths and hospitalizations, a health care expert expects the numbers of patients and cases will continue to decline.

Ballad Health System’s inpatient census went down during the past week, with 224 inpatients on Wednesday compared to 293 one week ago. The health system has averaged about 230 patients daily this week compared to 283 last week, an 18% reduction.

However, there were 64 patients in intensive care units Wednesday, also less than last week but the number of patients on ventilators remained nearly unchanged — 56 this week compared to 57 last Wednesday.

“Those numbers are extremely high, and that is the level of severity proportional to the contagiousness and the severity of the delta variant,” said Dr. Amit Vashist, chief clinical officer of Ballad Health. “Each subsequent variant is going to cause more and more severe illness. As more and more people get vaccinated, we still do have a substantial pocket of unvaccinated people, and they are the ones hit with the more contagious, more severe viruses. ICU levels are high because of the severity of the illness, and we expect ICU numbers to decline much more slowly compared to ones quarantining at home or in our med-surg units.

“And our experience is more of these patients on ventilators, unfortunately, die. Sometimes that is the only way we are getting ICU beds open. I don’t expect that to change dramatically anytime soon,” Vashist said.

There have been 125 area deaths due to COVID-19 in the month of October, including 76 during the past seven days, with 10 in Sullivan County, according to health departments in both states. That follows more than 250 deaths during the month of September and over 120 in August. Since March 1, the region has lost 815 residents to the virus.

“We expect those numbers to start to decline in the next few weeks,” Vashist said. “As many people know, death is a lagging indicator, and most of the deaths are coming from ICUs and people on ventilators. As the number of cases decrease, the number of hospitalizations are going to decrease. As those decrease, hopefully, the numbers of ventilators decrease.”

Vaccination rates rose by multiple percentage points in several Northeast Tennessee counties during the past week, according to the Tennessee Department of Health. The fully vaccinated rate in Sullivan County climbed from 43.2% to 47.5% during the past seven days while Washington County rose from 49.5% to 54.1% and Carter County climbed from 32.1% to 38.1% in the past week. All 10 counties reported increases.

Gains were much smaller in Southwest Virginia, where most localities rose less than one percentage point, according to the Virginia Department of Health.

The region’s cumulative fully vaccinated rate stands at 43.6%, which continues to trail state and national averages. Nationwide, 57% of all U.S. residents are fully vaccinated, according to the Centers for Disease Control.

“We have seen some increased level of vaccination. Not as much as we would have liked or hoped for but we continue to educate our community and do public service announcements in collaboration with our community partners,” Vashist said. “However, we still have a substantial percentage of our community members who are not vaccinated.”

“As long as we have significant pockets of unvaccinated individuals — especially given the population of our area, which has more aged people, people with chronic diseases — diabetes, hypertension, obesity, heart disease, kidney disease — we will continue to run the risk of variants coming and devastating our communities in ways that have not happened before. We continue to be very worried and that’s why we need to vaccinate as many people as we can,” he said.

Ten Northeast Tennessee counties reported more than 1,600 new cases during the past week, a number nearly identical to the first week of this month, according to the Tennessee Department of Health. Sullivan County reported nearly 400 new cases for the second straight week — 384 compared to 397 last week. However, that is almost 500 fewer cases than during the final week of September.

There are over 3,100 active cases across 10 Northeast Tennessee counties, according to the Tennessee Department of Health, which is down from about 3,600 the week prior.

Sullivan has the region’s largest number of active cases with 786 compared to 595 in Greene, 494 in Washington County and 268 in Hawkins County.

Sullivan added an average of 64.4 new cases per day over the past 14 days, which is nearly half the 109 per day rate for the final two weeks of September, but still the highest in the region.

New cases declined 18% in Southwest Virginia compared to the first week of October. Smyth County reported 158 new cases, Wise County 151, Washington County 145, and Wythe County at 105, according to the Virginia Department of Health.

The region’s combined seven-day average testing positivity continued to hover around 17% this week.

In Southwest Virginia, Wythe County was the region’s hotspot at 22.5% positivity, followed by Norton at 17.6%, Russell County at 16.7% and Smyth at 16.5%. The city of Bristol remained just above 10% for the second straight week, according to the Virginia Department of Health.

In Northeast Tennessee, Green County was at 17.3%, Carter County was at 15.9% and Hancock was at 18.4%, but with a low testing rate. Sullivan County’s seven-day rate was 12.6%, down sharply from its 17.5% rate a week ago, according to the Tennessee Department of Health.

Asked why the virus appears to be cooling after successive months of increased cases and hospitalizations, Vashist said experts are uncertain.

“I think nobody knows for sure, but as we have seen throughout this these variants typically run a cycle of about two months. At that point, either of two things happen — either there will be another variant strain that takes over or [we develop] a level of herd immunity to that particular variant strain. Each variant strain that comes along will be a little more infectious, more severe than the previous one so the level of herd immunity has to keep on going up for us to keep pace,” Vashist said.

There were significant differences between the COVID surge the region experienced last winter compared to the current surge, which began in late summer and continues into the fall.

“Two things happened last winter. Our society was still doing a lot of mitigation measures. We curbed our celebrations to a certain extent, there was masking, there was distancing, there was a lot of emphasis on hand hygiene. On top of that, in late December the vaccinations started and that was able to clamp down as soon as people got their shot number two a few weeks later. That all helped bring the number down very steadily,” Vashist said.

“What happened this time, we kind of plateaued in terms of vaccinations, where last winter we went from zero to thousands in a matter of a couple of weeks,” he said. “And society has gotten more fatigued in terms of distancing, masking, all those kinds of things. Also last year, schools were doing a lot more distanced learning, kids were at home doing distance learning and now schools are in full classroom mode. I think a combination of those factors has made it very slow for the virus to decline compared to before.”

DAMASCUS, Va. — Juggling a family and a job as a pastry chef is, well, a piece of cake for Joe Bridges, better known on social media as “Joe t…

A federal jury sided with the town of Abingdon on Thursday in a lawsuit filed by former Town Manager Gregory Kelly, who sought more than $100,000 in severance pay.

Closing the city’s embattled landfill will be neither quick nor simple, consultants told the Bristol Virginia City Council on Tuesday.

Confederate statue at Washington County Courthouse to move due to construction

ABINGDON, Va. — Since the days of the Great Depression, a Confederate soldier monument has stood outside the Washington County Courthouse in A…

Approximately 150 concerned Bristol residents packed into the train station Tuesday night to share frustrations about Bristol, Virginia’s troublesome landfill and launch an advocacy group while also demanding that the landfill be closed as soon as possible.