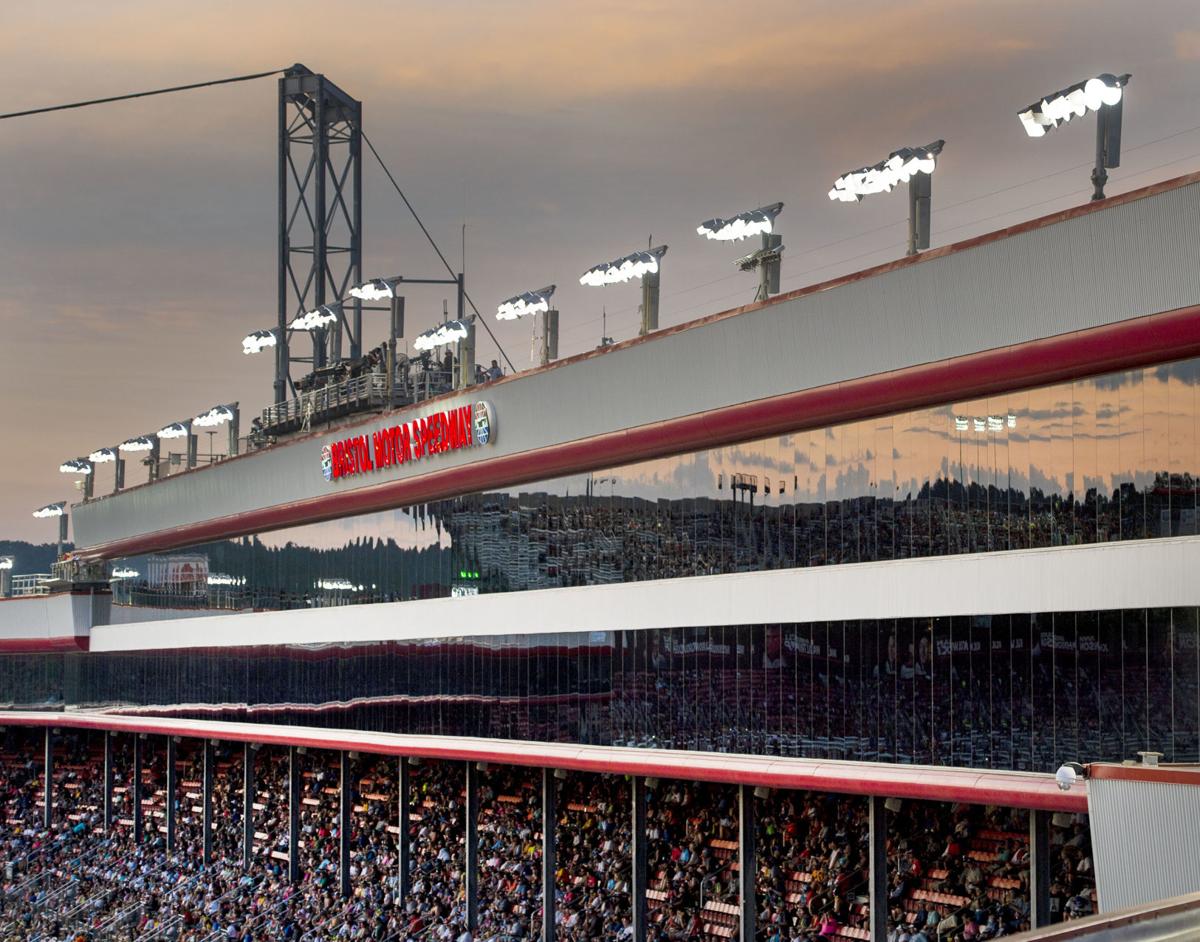 The sunset reflects off the front stretch suites during the 2019 Bass Pro Shops NRA Night Race. As Bristol Motor Speedway prepares to host the NASCAR All Star Race on Wednesday, public health experts are raising concerns about the safety of raise attendees. 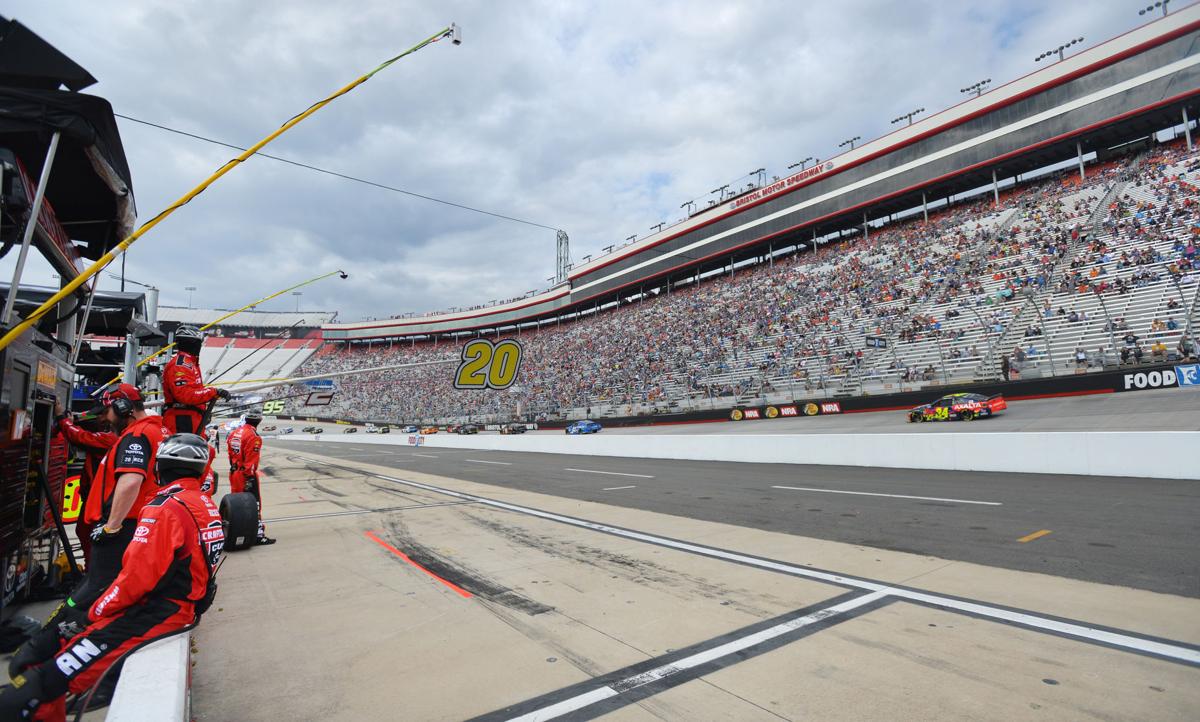 Pit crews watch the late laps of the 2019 Food City 500 at BMS. As Bristol Motor Speedway prepares to host the NASCAR All Star Race on Wednesday, public health experts are raising concerns about the safety of raise attendees.

BRISTOL, Tenn. — As Bristol Motor Speedway prepares for what could be the largest crowd at a U.S. stadium since the coronavirus pandemic shut down spectator sports this spring, some public health experts question the risks of welcoming as many as 30,000 fans at Wednesday’s NASCAR All-Star Race.

The race was originally scheduled to take place in Charlotte, North Carolina, but high rates of COVID-19 infections there prompted NASCAR to move the race to Bristol, where case numbers were much lower when the decision was announced in June.

Speedway officials are implementing an extensive plan to enhance cleaning procedures, physically distance spectators in the stands and require fans to wear masks at most areas of the track, except for at their seats. BMS is also only filling part of its total capacity of about 160,000 seats and it’s unclear if the maximum of 30,000 fans will actually attend.

But the race comes amid increasing numbers of COVID-19 infections in the region, including what Ballad Health officials described Friday as a “drastic” rise in Northeast Tennessee’s cases.

And in recent interviews, a number of public health experts said they are concerned about the safety of the race itself and the potential impacts on the surrounding community.

» Trams and shuttle buses will not operate

» Face coverings required in common areas like gates, bathrooms and concessions, but masks can be removed once guests are in their assigned seats

» A staggered exit plan when the race concludes

» Debit and credit cards only for food and souvenirs; no cash accepted

Safety measures at the event

“The idea of putting 30,000 people in any venue is really, really frightening to me,” said Jon McCullers, an infectious disease specialist at the University of Tennessee Health Science Center in Memphis.

The speedway is staggering seating to provide at least 6 feet of distance between groups in the stands to limit physical proximity to one another. But in recent interviews, experts noted that in situations where people are yelling, cheering or talking loudly, COVID-19 — which can spread through respiratory droplets — could travel farther than the standard 6 feet often cited as a minimum distance people should keep from one another.

Others said they would recommend that people wear their masks to limit the spread of respiratory droplets with the physical distancing measures in place. Even then, sitting in stands could still place people in proximity to others who are infected, but may be asymptomatic and silently spreading the virus.

“I would say if you’re 12 to 15 feet away, wearing masks and there’s a prohibition on cheering — if you can get NASCAR fans not to cheer, good luck — but if they were able to do that, I’d feel a whole lot more comfortable, you’d still have a bunch of people that were sick, but at least that’s some risk mitigation,” McCullers said.

Costi Sifri, director of hospital epidemiology at the University of Virginia Health System in Charlottesville, said he looks at infection control through the lens of what he called the “three Cs:” closed spaces, crowded places and close contact.

Health leaders are concerned about the virus’ ability to spread in enclosed spaces with poor ventilation, which is less of a concern for an outdoor track like BMS.

Still, Sifri said the other two Cs — crowds and close contacts — are particularly relevant to thinking about this event.

“Every effort should be made to try and make sure that people are spaced even when they’re walking through the arena,” he said.

For its part, BMS will post floor markings to remind people of the distances and implement a staggered exit plan at the end of the race.

“I think if the plan is executed as written, the race track will be very safe,” Mayes said.

Others are more skeptical.

“My experience with plans like these is that they all sound really good when you first write them down, and then you go to actually put them into practice, and you have all kinds of problems,” said Tara Kirk Sell, a scholar at Johns Hopkins University’s Center for Health Security and an assistant professor at the university’s public health school.

Sell has followed the effort of American sports to try to resume under public health restrictions.

Holding an event with social distancing measures in an outdoor venue like BMS would make more sense in a country that has its outbreak under control, she said. Sell pointed to ongoing issues with access to timely testing and effective contact tracing as the types of barriers that should create some caution before welcoming 30,000 into an event.

“I just don’t think we’re in a spot where we can do these types of things right now,” Sell said.

According to a recently released scale that ranks activities for their COVID-19 risk level, going to a sports stadium is a high risk, ninth on a scale of one to 10. Other activities ranked ninth on the scale, released by the Texas Medical Association, were going to a bar, movie, gym or concert. Activities like opening the mail was ranked at a one, low risk, while traveling on a plane was at seven, a moderate-high risk.

Impacts beyond the track

As thousands travel to Bristol for Wednesday’s race, interactions between visitors from outside the region and the local community also present new opportunities for infection outside the speedway.

“It’s going to greatly increase the risk to our community for COVID-19 spread,” said Karen Shelton, the director of the Mount Rogers Health District in Southwest Virginia. “The race track itself may have a great plan in place, but the rest of the community has to deal with 30,000 people in the community between hotels and restaurants and all the things that go on.”

Sifri, at UVa, noted the climbing case numbers in several states across the South where fans might be coming from, like Tennessee, North Carolina, Georgia and Florida, a coronavirus hot spot. This is part of the public health risks surrounding the event, he said.

“Part of the calculation of risk is the factors that we’ve talked about: the close contact, crowded conditions, if you’re in a closed space,” Sifri said. “But it’s also, how much fuel is there to potentially feed a fire?”

Jerry Caldwell, executive vice president and general manager at BMS, cautioned in an interview that the speedway estimates a significant number of attendees — about 40% — will be from the local region.

Wednesday’s race is also more scaled back compared to traditional NASCAR events at the track, which involve multiple events over a series of days.

“This is essentially a one-day show,” Caldwell said.

“A lot of these folks that are coming in, it’s going to be much like what happens every single day now. I mean, we live at the intersection of [Interstates] 81 and 26. We have lots of people stopping on a daily basis visiting gas stations and restaurants when they’re traveling through the area. We’re going to have a lot of folks doing that same kind of thing. They’re going to be coming in for the event, and they’re going to be heading back to wherever they live.”

He said concerns about adhering to social distancing guidelines go beyond just the race. The county has faced issues with people traveling outside the area and bringing the virus back, Mayes said.

Despite leading the county Health Department where the race is being held, Mayes said that he was not consulted on the decision to move the race from Charlotte to Bristol. The move was publicly announced June 15.

Mayes declined to weigh in on whether his department should have been asked for input on the decision, but said the BMS plans “are very impressive from a safety standpoint.”

In an email Friday, Amanda Murphy, a spokeswoman for the Tennessee Economic Recovery Group, wrote, in part, that, “We are encouraged by the steps NASCAR and Bristol Motor Speedway are taking to mitigate risk to the community like requiring masks, digital ticketing, physical distancing and operating at a greatly reduced capacity.”

Murphy also pointed to the efforts of local leaders asking residents to follow social distancing guidelines and said the business community is being asked “to implement strong measures to protect their employees and customers.”

A spokesperson for the Tennessee Department of Health did not return inquiries Friday seeking comment about concerns raised about the event and whether there are any reservations about holding the race amid recent rises in new coronavirus cases.

Given the risks surrounding the race, McCullers, with the University of Tennessee Health Science Center, was critical of the event being allowed to move forward. Federal or state authorities should have stepped in to prevent it, he said.

“This is really a failure of the government,” he said.

Caldwell, for his part, has said the track knows that hosting the event “comes with great responsibility.”

“We’re encouraging all of our guests when they’re out in the community, to respect our community and wear a mask and practice social distancing and the safety measures that are appropriate and in place,” he said.

On Friday, as recent spikes in COVID-19 cases led Ballad Health to resume its regular media briefings on the virus for the first time in weeks, officials at the regional health care provider faced questions about the race.

“I think it could be a great thing for our region from an economy standpoint, but at the same time we have to make sure we’re taking all the precautions we can,” said Eric Deaton, Ballad’s chief operating officer.

Do you think it is safe for Bristol Motor Speedway to host the NASCAR All-Star race Wednesday with 30,000 spectators?

The sunset reflects off the front stretch suites during the 2019 Bass Pro Shops NRA Night Race. As Bristol Motor Speedway prepares to host the NASCAR All Star Race on Wednesday, public health experts are raising concerns about the safety of raise attendees.

Pit crews watch the late laps of the 2019 Food City 500 at BMS. As Bristol Motor Speedway prepares to host the NASCAR All Star Race on Wednesday, public health experts are raising concerns about the safety of raise attendees.