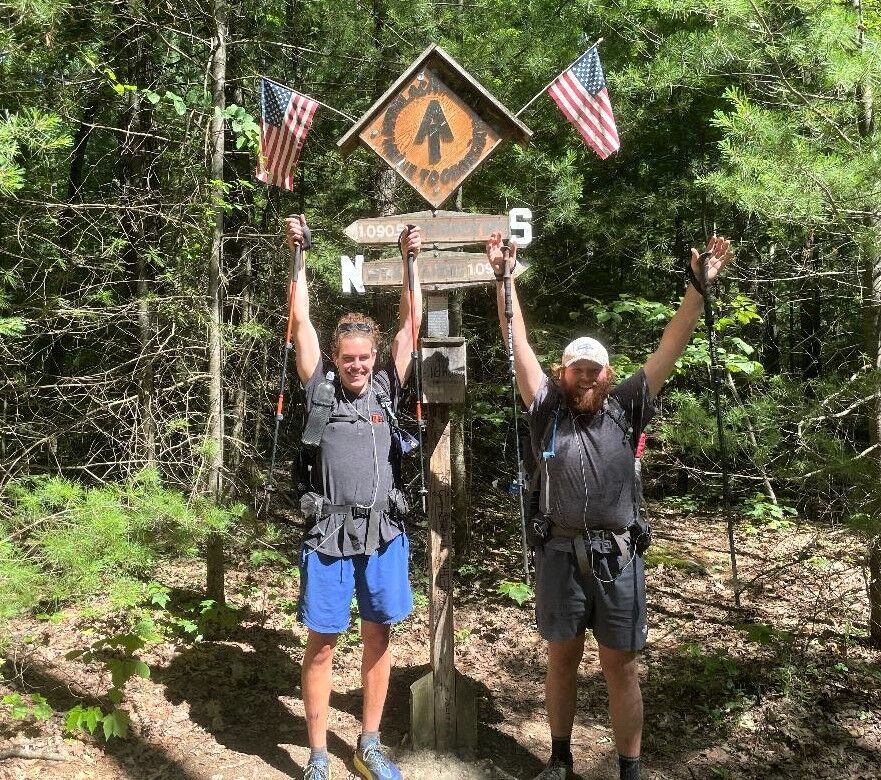 Tucker Grant, left, and Coy Meade at the half-way point. 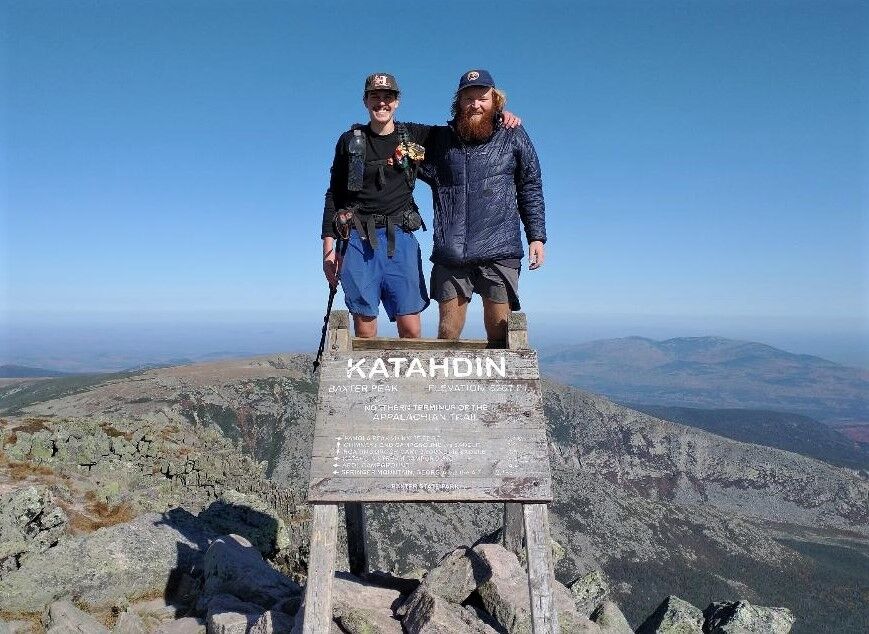 BY CAROLYN R. WILSON | SPECIAL TO THE BRISTOL HERALD COURIER

ABINGDON, Va. — Two Washington County hikers embarked upon a journey of self-discovery while on a mission to complete the Appalachian Trail this fall.

Childhood friends Tucker Grant, 25, of Abingdon, and Coy Meade, 24, of Glade Spring, finally grabbed the chance to hike the coveted expedition, a pact they made when they were just kids in Boy Scouts.

With backpacks loaded with necessities, the twosome set out March 1 for the straight-thru foot path from the southern terminus at Springer Mountain, Georgia, to the northern terminus at Katahdin, Maine. They were prepared to see a part of the world filled with breathtaking scenery of majestic mountain peaks and serene sunsets.

They got all that and more.

It’s not the cold temperatures, rain-soaked clothing and encounters with wild animals that stand out in their memories of the seven-month adventure. It’s the generosity of people they met along the way and the camaraderie they found among other hikers.

Meade toted more than the usual tent, food and change of clothes. He carried his guitar strapped on his back for the entire 2,192-mile walking adventure.

“People I met on the trail thought I was crazy for bringing my guitar, but, it was worth it to me. I didn’t know if I could go that long without music while I was on the trail,” he said.

The avid musician resorted to purchasing a lightweight guitar made of carbon fiber just for the trip.

After a tiring and cold day on the trail, the friends often gathered around an evening campfire to enjoy the strumming guitar against the quiet sounds of surrounding nature.

The music attracted other hikers who joined in the playing of folk, blues and classic rock songs.

“Music always loosens the atmosphere,” said Grant. “We started sharing with each other our experiences on the trail.”

It was an invitation for Meade to compose a few lyrics while leading his new friends in songs.

Meeting a diverse group of people on the trail and seeing new places was a life-changing experience for both of them.

“I learned that life is much bigger than just me,” said Grant. “Before hiking the trail, I would have described myself as a typical college student. Now, I see so much more to life.”

Both of them said the experience helped restore their faith in humanity.

“There’s an outstanding community found on the trail. There are good people everywhere in the world, and I saw that first-hand on the Appalachian Trail,” Grant said.

“They were honoring the victims of the Sept. 11 terrorist attacks,” said Grant. “It was a powerful and emotional experience to witness this. It was a highlight of the trip for me.”

For Grant, the adventure helped him gain a new-found appreciation for the simpler things in life.

“A stranger in the parking lot hands you a can of soda or a random person you meet in town offers you a shower and a place to pitch your tent in their yard. Things like that help you to enjoy the little things in life,” said Grant.

The hikers endured days on the trail when the temperatures dropped well below freezing, when their socks and shoes were saturated with water after a hard rain, and a nearby hurricane created winds that made it hard to even stand.

They agree that the endurance they mustered along the way has uncovered a sense of determination they didn’t know existed.

“I’ve discovered that I’m pretty determined. A lot of people doubted we could make it, but I never wanted to quit even when things got rough,” said Meade.

“Completing this hike makes me think I can do most anything I approach or try. I have the fortitude to see it through,” Grant agreed.

“There were a few miserable times on the trail, but just to get through it really boosts your confidence.”

Some beautiful, some scary experiences

Both hikers agree that their journey created a multitude of memories. But, there were times when they were downright scared.

While crossing a river in Maine during the last 100 miles of the trip, Meade lost his balance and fell into a river. He lost his shoes and was forced to wear a pair of Crocs for 17 miles before making arrangements for a nearby hostel to meet him with a new pair of hiking shoes.

Some mishaps ended with a good outcome. On another occasion, Meade fell 20 feet off of a boulder and landed on a soft bed of moss between two large rocks.

One night, they woke to stomping noises around their tents as they slept. “I put on my head lamp and peeked out of my tent,” said Grant. “It wasn’t a bear. It was a moose the size of a horse. It left quickly.”

When the hikers were able to take breaks from trail life, they ate at diners and restaurants in towns along the trail. Meade fondly remembers eating homemade biscuits, gravy and eggs at the Smoky Mountain Diner in Hot Springs, North Carolina, a sharp contrast from snacking on the dehydrated meals carried in his backpack.

Meade lost 60 pounds during the hike and wore out five pairs of shoes, but he’ll probably do a thru-hike again one day. Grant said he also plans to do another thru-hike.

“I love the outdoors and the beautiful scenery. The sunrises were pretty great,” said Meade.

“I saw the sun peeking over the mountain ridges as I got my first taste of coffee in the mornings,” Grant said. “It’s the small things that make you feel so free.”

Tucker Grant, left, and Coy Meade at the half-way point.