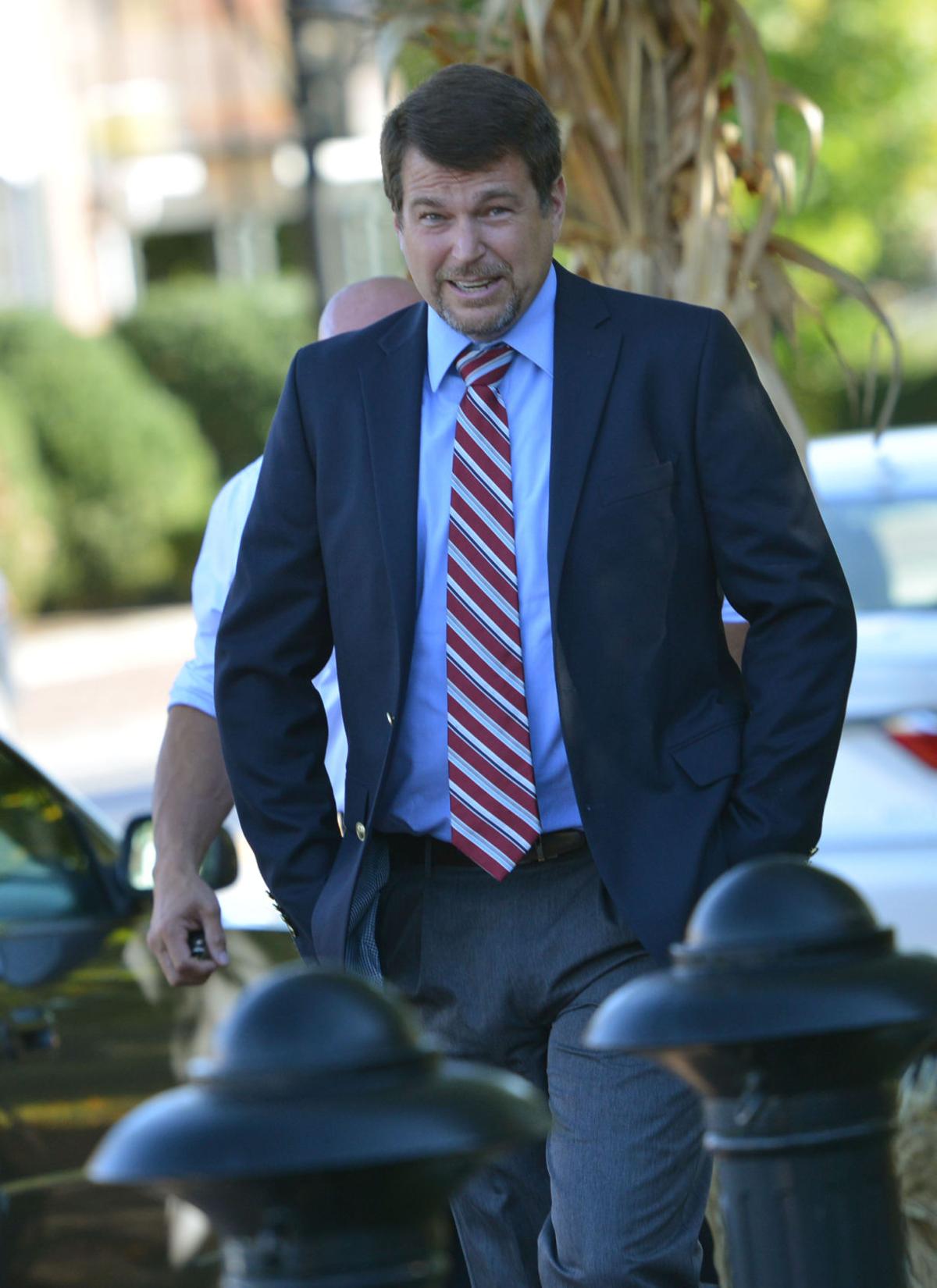 Wes Rosenbalm, 45, is shown walking toward Federal Court in Abingdon, Virginia on Thursday for his sentencing. 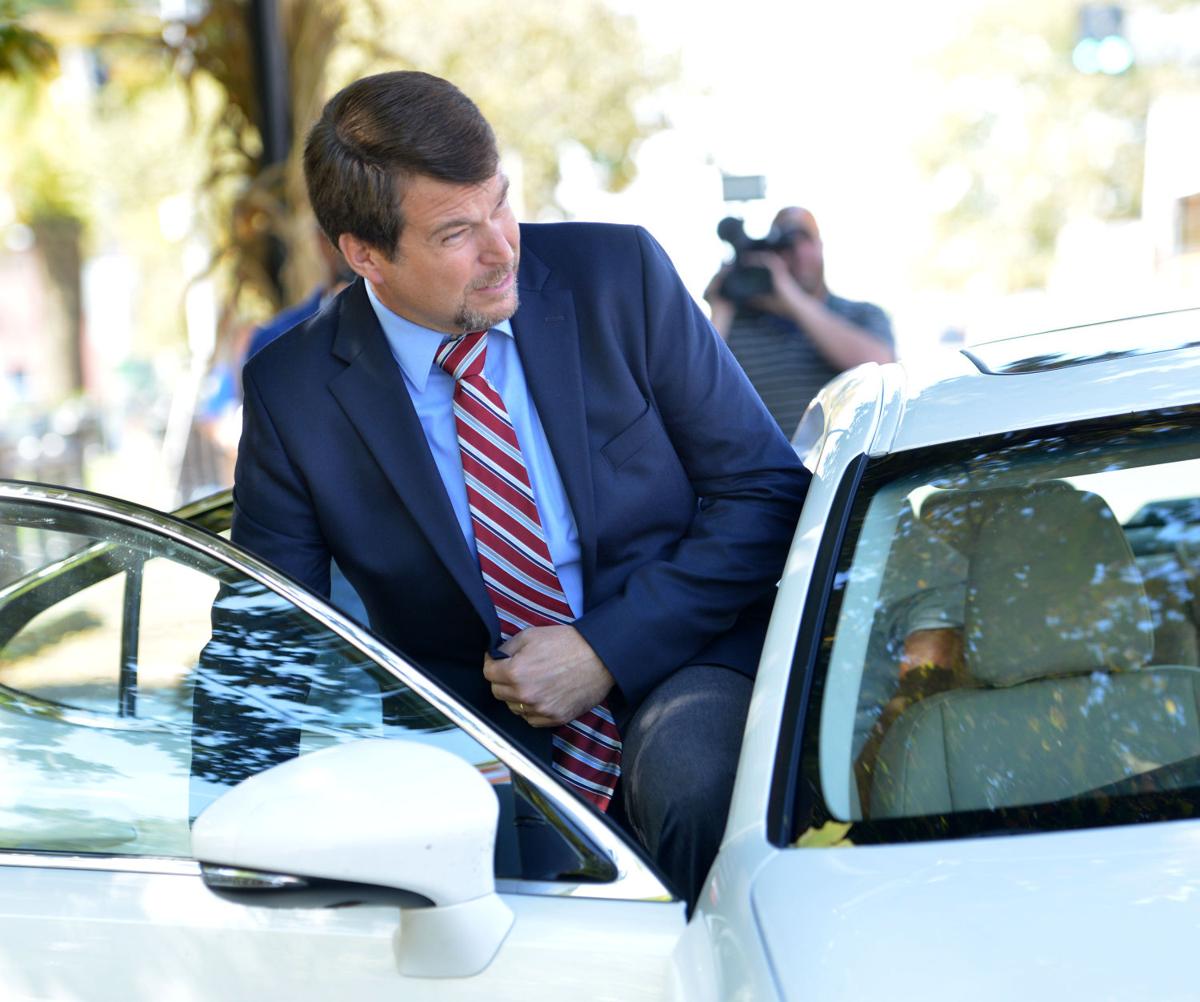 Wes Rosenbalm, 45, leaves Federal Court in Abingdon, Virginia, on Thursday, after being sentenced to 33 months in prison. 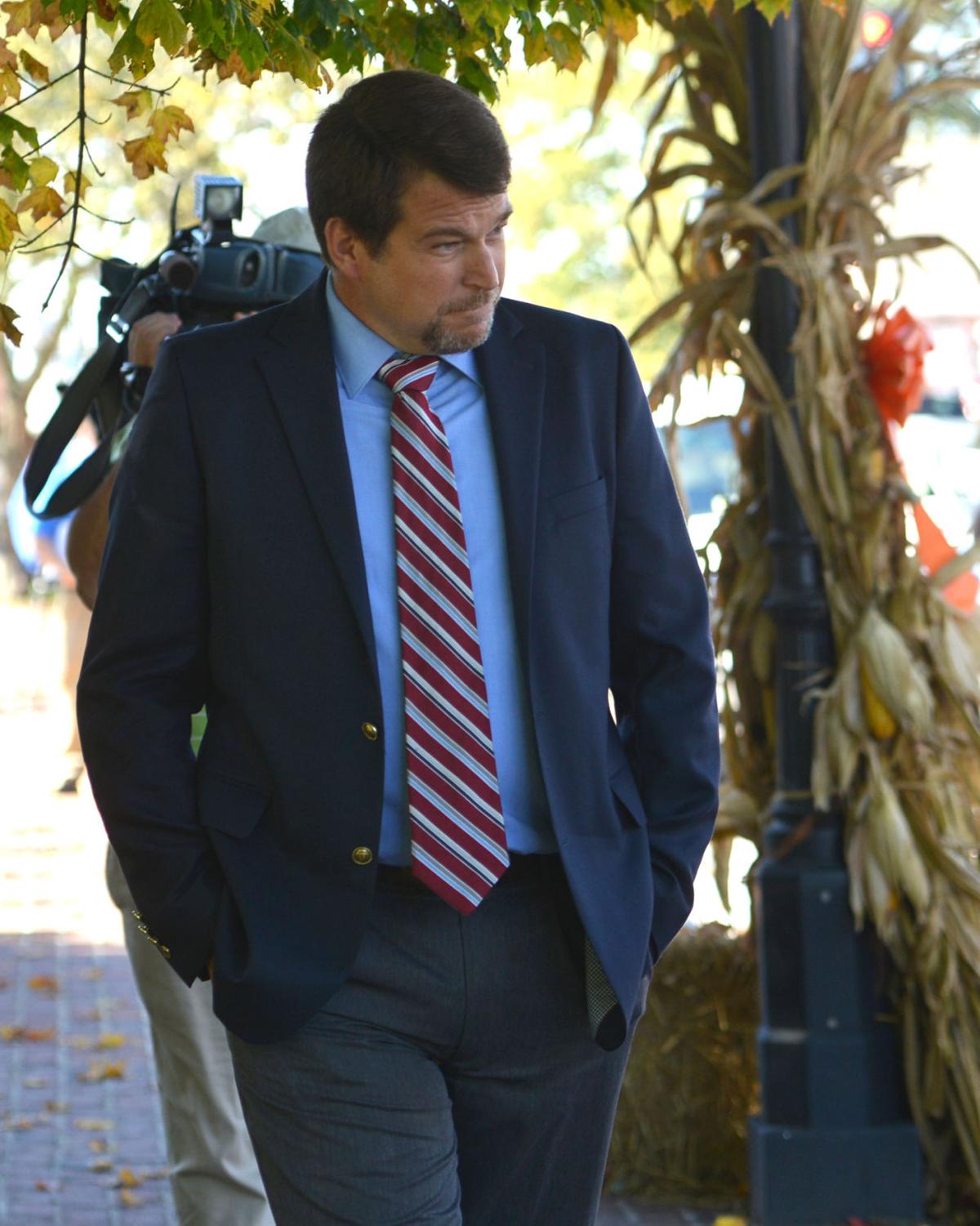 Wes Rosenbalm, 45, is shown leaving Federal Court in Abingdon, Virginia, on Thursday after being sentenced to 33 months in prison. 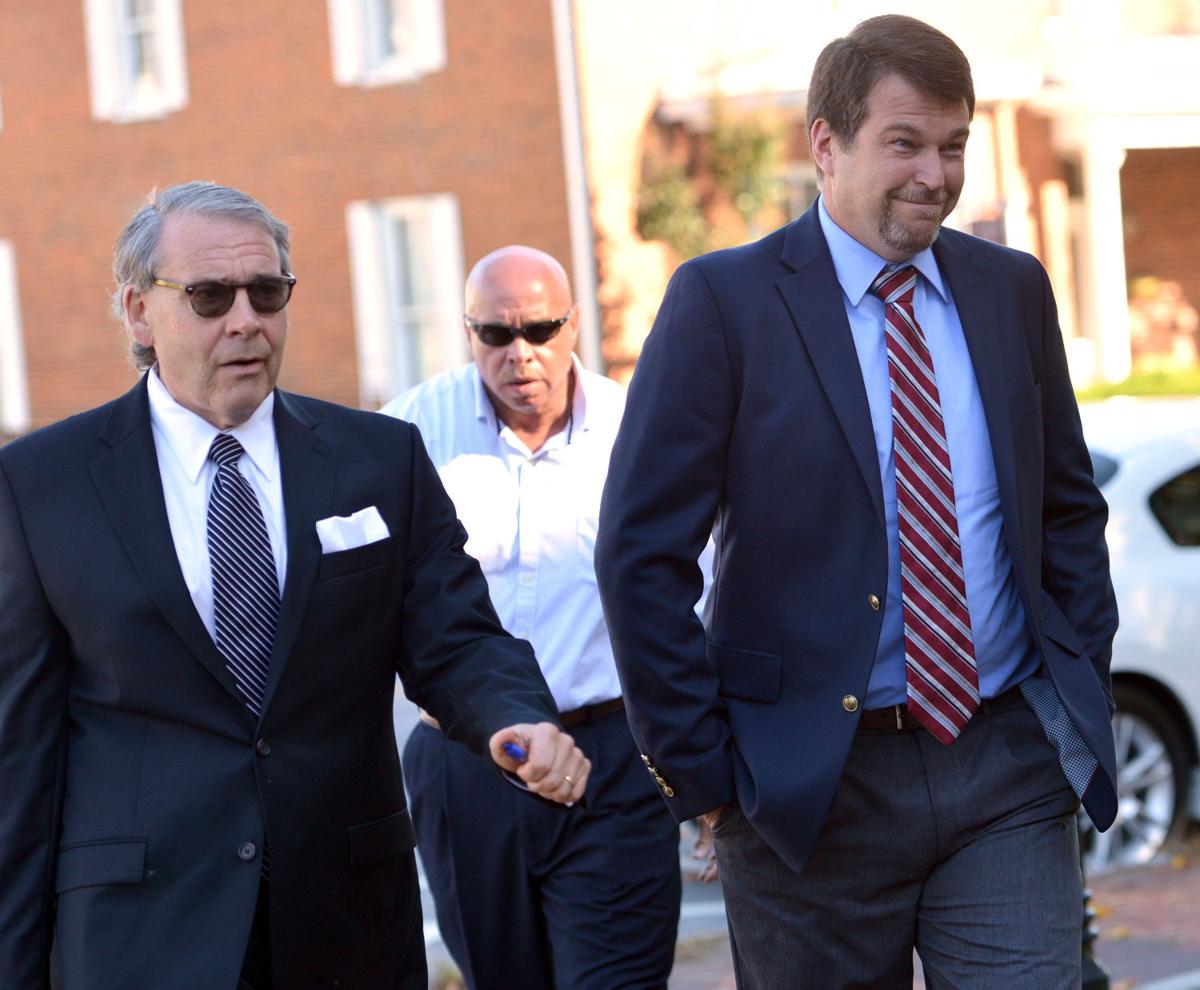 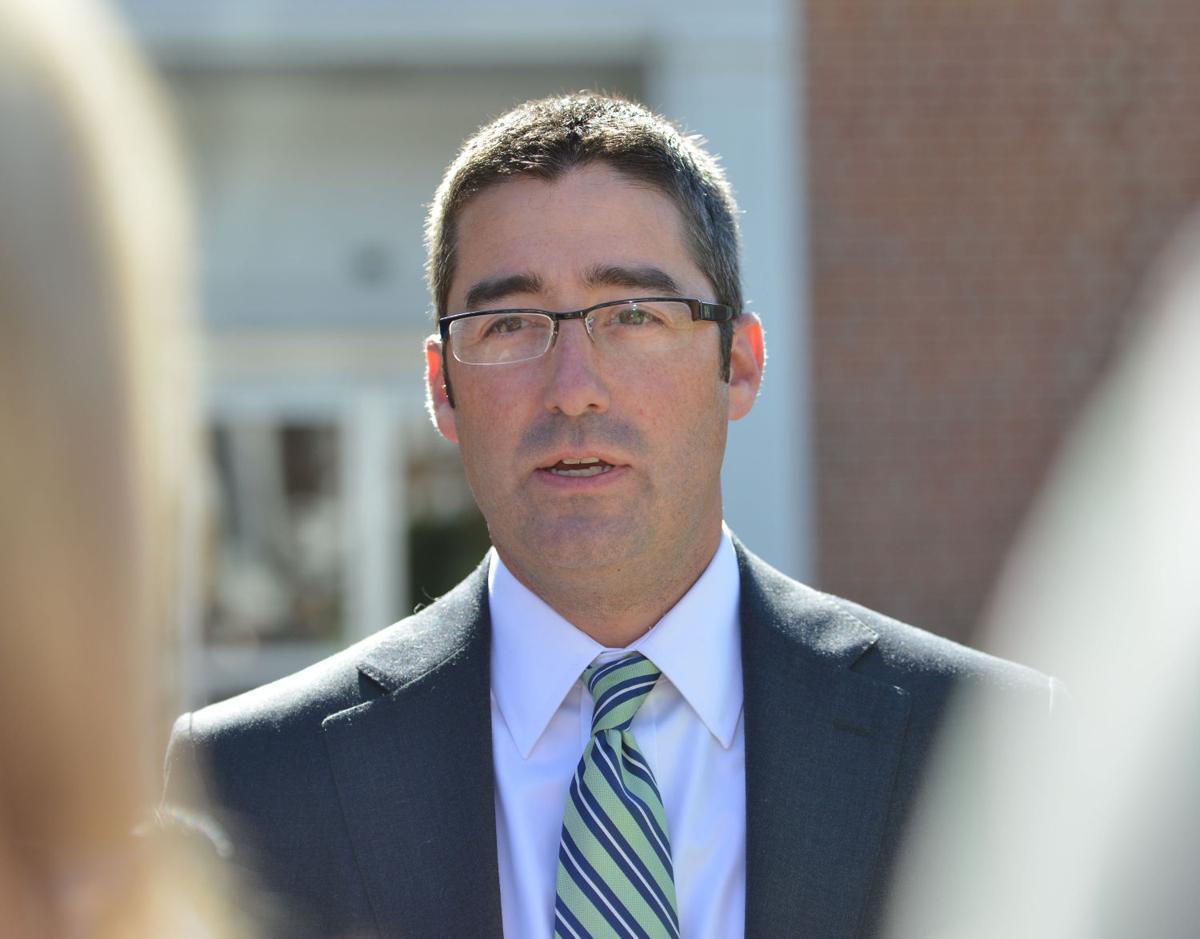 ABINGDON, Va. — Former BVU CEO Wes Rosenbalm accepted responsibility for his crimes Thursday and asked that they not reflect on his former employees, before a judge sentenced him to 33 months in prison.

Appearing before U.S. District Judge James P. Jones, Rosenbalm was sentenced after earlier pleading guilty to one count of conspiracy to defraud the IRS and conspiracy to commit federal program fraud. He became the third former BVU executive and fifth person overall to be sentenced in conjunction with an ongoing federal corruption investigation into the public utilities provider. His sentence is the longest so far.

Rosenbalm, 45, was also ordered to pay the previously agreed upon $150,000 in restitution. He is expected to report to begin serving his sentence within 60 days, prosecutors said. He asked to be placed at the medium security prison in Manchester, Kentucky, but the judge said he would leave placement up to the Bureau of Prisons.

Speaking in a low voice, Rosenbalm told the court he has let down family, friends and the community.

“To the customers of BVU and the employees who work there — there are good people working there — my actions should not reflect on them,” Rosenbalm said. “I acknowledge my wrongdoing and accept responsibility for the consequences and I am ready to move on with my life.”

The hearing began about 20 minutes late because another case ran long. While he waited, Rosenbalm mostly sat alone at the defendant’s table, clutching and unclutching his hands and staring straight ahead.

Prior to pronouncing sentence, Jones left open the door that prosecutors could seek a reduction if Rosenbalm continues to cooperate with the ongoing investigation. Both the judge and Assistant U.S. Attorney Zachary Lee discussed the potential for revisiting the sentence. Lee said Rosenbalm has been cooperating with this investigation for about two years and continues to work with investigators.

“Mr. Rosenbalm has expressed his willingness and desire to continue his cooperation,” Lee told the court. “At the appropriate time, the government may see if that cooperation merits seeking some reduction in sentence.”

Rosenbalm served as BVU president and CEO from 2001 through September 2013.

“I hope Mr. Rosenbalm continues to cooperate with the government,” the judge said. “If the government believes that cooperation has been appropriately significant they can ask the court to adjust his sentence. I make no promise in that regard and nothing in this situation is guaranteed. This offense was serious, but the government may make a request of the court at some future time.”

Prosecutors say Rosenbalm and other BVU officials engaged in defrauding the IRS by receiving benefits, including personal use of BVU vehicles, paid memberships to the Country Club of Bristol, gift cards, cash bonuses and other items not disclosed on federal income tax returns.

Lee estimated that the value of the vehicles was $6,000 per year apiece for Rosenbalm and each of five other high-ranking BVU employees, from July 2006 until July 2012.

BVU also paid for country club memberships for Rosenbalm and three other employees, with a total value of nearly $70,000, Lee said. In addition, there were at least $48,000 in unreported cash bonuses for BVU employees and thousands more in gift cards.

“That was not run through payroll and not reported on 1099 forms as all parties agreed, Mr. Rosenbalm and others knew should have been done,” Lee said during the hearing.

Thursday’s sentence was at the high end of federal sentencing guidelines for someone with no previous criminal record, but Rosenbalm could have received up to five years behind bars.

“Much was given to him and consequently much was expected of him and he failed that expectation in a dramatic and very serious manner,” the judge said. “At the heart with this case is it is more serious because this was a public institution.”

Jones said he carefully considered all factors of the case, including more than 40 letters of support from Rosenbalm’s friends and family.

“Those letters indicate a lot about the character of Mr. Rosenbalm. He is a strong family person, he has a very large family and he was very active in the community and active in his church. Those are all good things,” Jones said.

“This has been a difficult period for our community, customers and employees,” Bowman said. “BVU continues to cooperate fully with the investigation. Because an investigation is still ongoing, I cannot discuss any additional specifics involving this case.”

BVU: A collection of stories about the BVU Authority, including the federal corruption investigation and OptiNet

A compilation of all stories related to BVU and the ongoing corruption case.

Unnerved by a manhunt overlapping its bus routes, a rural Kentucky school district called off classes Monday as police searched for a man with…

A tax break for Tennessee electric cooperatives, enacted by the Legislature in 1988, violates the state constitution, according to an opinion …

Wes Rosenbalm, 45, is shown walking toward Federal Court in Abingdon, Virginia on Thursday for his sentencing.

Wes Rosenbalm, 45, leaves Federal Court in Abingdon, Virginia, on Thursday, after being sentenced to 33 months in prison.

Wes Rosenbalm, 45, is shown leaving Federal Court in Abingdon, Virginia, on Thursday after being sentenced to 33 months in prison.