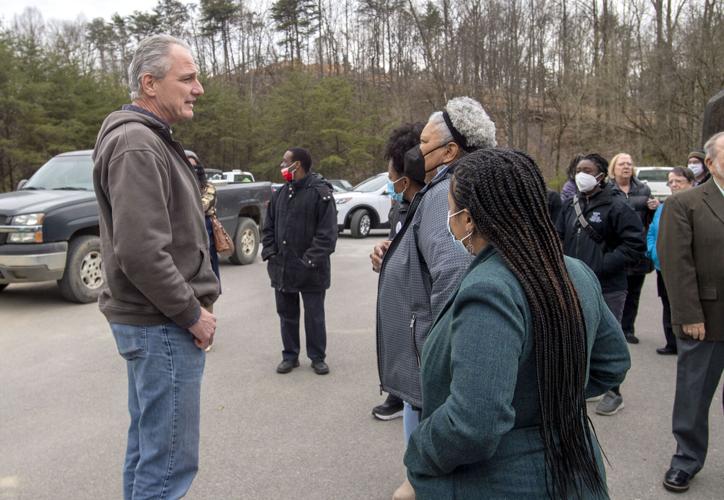 Mike Martin (left), Bristol, Virginia landfill collections manager, talks with members of the group touring the city of Bristol and the landfill. 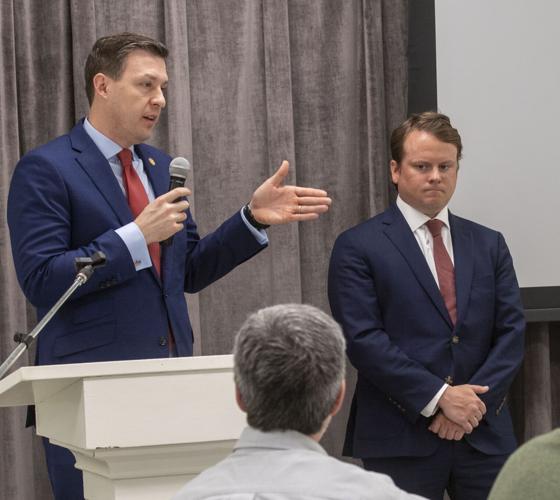 Virginia Dels. Israel O'Quinn (left) and Will Wampler (right) speak during a meeting before the tour of the landfill. 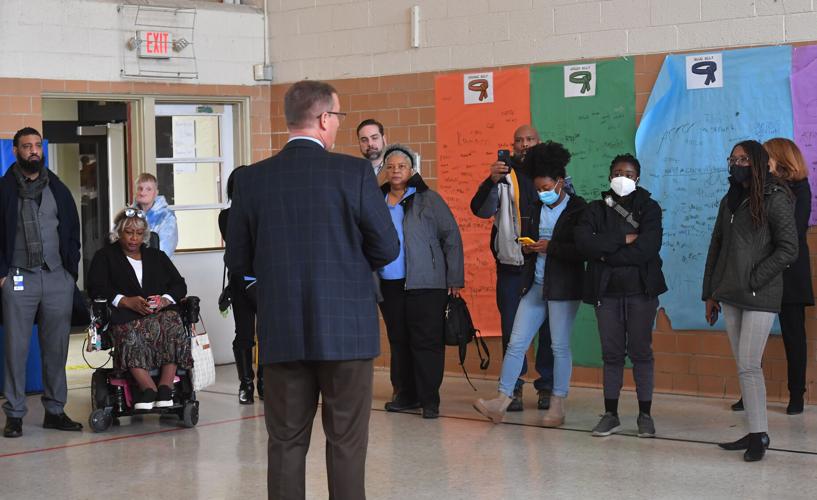 Bristol Virginia Schools Superintendent Keith Perrigan talks to members of the tour group as they make a stop at Highland View Elementary School. 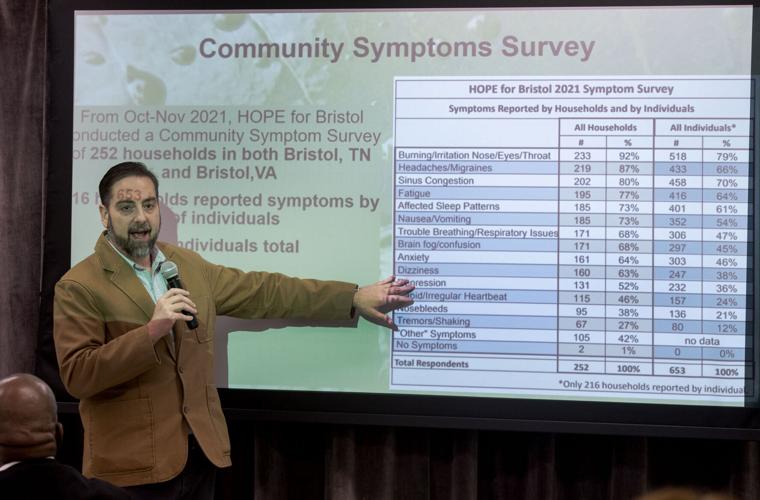 The Rev. Sam Weddington of First Presbyterian Church speaks before the tour of the Bristol, Virginia landfill on Tuesday. 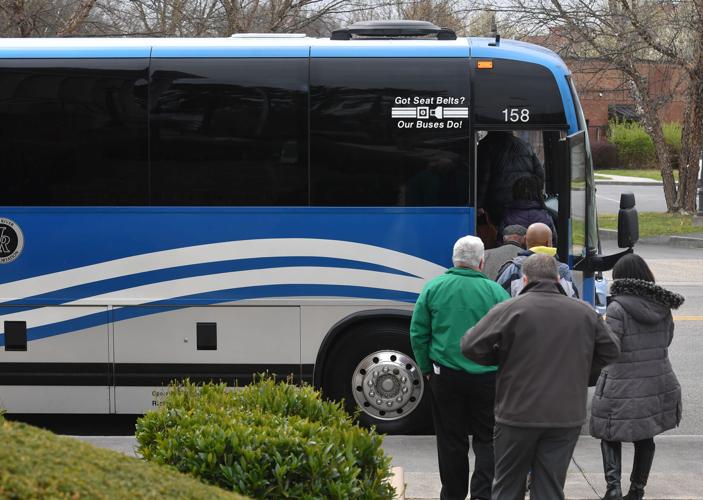 Members of the group board a bus to tour parts of Bristol, Virginia and the landfill. 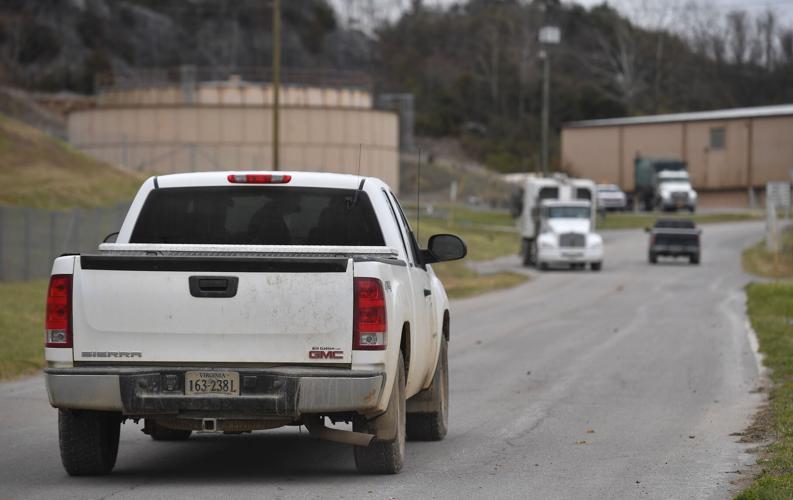 Members on the tour were taken back to the active part of the Bristol landfill on Tuesday.

BRISTOL, Va. — A group of about 20 people from across Virginia joined with local residents concerned about the Bristol, Virginia landfill to tour that facility and surrounding areas Tuesday, learn more about issues facing the Twin City and hear about state efforts to address the issue.

Residents of Richmond, Petersburg, Newport News and other areas came by bus — at the invitation of climate justice advocacy group Virginia Interfaith Power & Light and the Sierra Club — to show support for people dealing with odors and emissions from the city landfill.

“The main point is we’ve got landfill pollution in communities of Black and Brown and poor neighborhoods, and it needs to cease. This is what happens when you do this to people who cannot speak for themselves,” the Rev. Jackie Nophlin of Bristol, Virginia said. “With issues such as the landfill, people have complained for years, but it’s when those of privilege get a whiff of it, then we get all this attention.”

The same group previously hosted a press conference to voice its concerns.

Angela Harris of Newport News, chair of the Southeast CARE Coalition, said, “We are in full solidarity with you. We have been dealing with the environmental justice movement for the last 10 years.”

She said her group is a “phone call away” and urged local residents to hold public officials accountable.

“I know we have a hard time in our community talking about environmental justice. We want to say everybody suffered, and that’s true. But we can also recognize some people are less able to deal with that suffering when it comes down on them,” Weddington said.

“It is time for Bristol, Virginia to join us in the fight to help bring relief to Bristol residents. There are weatherization projects we can do, [air] purifiers we can do, if somebody’s been under this for six months, give them a break at a hotel somewhere so they can sleep for a couple of days,” he said. “I’m calling on the state of Virginia to help us to remediate those practical impacts.”

Widespread concerns about pungent odors and their effects first became public in late 2020, and the city embarked on a series of attempted fixes for the problem, which still persists. Last week a panel of landfill experts from across the nation visited Bristol — at the behest of the Virginia Department of Environmental Quality — to learn about the problem and try to develop solutions. Their report is due in late April.

Some funding is expected to come from the state, he said.

“We have language in the House and Senate budgets that starts immediately and goes through July 1, 2024, to formalize DEQ’s role assisting with the city-owned landfill. There are some funds we hope to be able to get transferred over from other line items to DEQ,” O’Quinn said. “It’s difficult, if not impossible, to fund open-ended requests because we don’t know what we’re looking at. We know it will be in the millions of dollars for the solution, but is it a few million or several million? We don’t know.”

Where the money will come from is still to be determined.

“Ultimately we are going to have to make an ask. I suspect it’s going to be some combination of state, local and hopefully federal, even though the EPA has declined to declare it a Superfund site — which is good and bad. Having a Superfund site in your backyard is not a good thing, but having the funding is helpful in mitigating those things.

“There may be some other ways or other agencies outside of EPA that we could perhaps get some additional funding, and it will be helpful to know the price tag. That’s what we’re waiting on from a budgetary standpoint,” the delegate said.

The legislation directs DEQ to be involved in the entire process, including implementing a solution, O’Quinn said.

“I sat in on two of their [panel] meetings when they were here this last week. These are environmental experts from all over the country, not just Virginia. We have some academic experts and people who practice doing landfill engineering and remediation strategies, and they went to the landfill. They’re working on a variety of remediation strategies to include additional gas wells, odor capture strategies, long-term water treatment and gas treatment so the smell and contaminants are contained in a way that doesn’t affect Bristol, Virginia or Tennessee residents,” Wampler said. “We know how big a problem it’s been from a health and environmental standpoint, from an economic development standpoint and community wellbeing.”

“I think this project warrants general fund dollars coming to help the people of Bristol. I think the state has already prioritized it, and more resources will be available. However, this problem has been borne for 25 or 30 years, including the legacy sites that sit behind the landfill.

“There is a fix coming on this. … I think we need to focus on [and make sure] the recommendations from the expert panel for mitigation and remediation are followed and funded,” Wampler said.

Members of the group were driven through the landfill by city employees and then rode through several neighborhoods around the landfill impacted by the odors. They also visited Highland View Elementary, which is located less than 2 miles away. No odors were experienced Tuesday at the church where the group first assembled, the school or the entrance to the landfill.

“We are the closest school to the landfill, but we haven’t really had any issues with the smell recently,” Superintendent Keith Perrigan told the group. “Before February we did have a couple of calls. However, you can go over to [the] Bristol, Tennessee side, and schools on that side of town continue to have problems. For whatever reason we’ve not had that issue here at Highland View, and we’re very thankful for it.”

He credited the bipolar ionization technology, which was installed in all city schools using federal COVID-19 relief funds, as helping mitigate any odor issues.

Perrigan said he too lives near the landfill and hasn’t had regular issues, but a half-mile away, at a retail store, the smell can be overpowering.

A year after opening in Gary, Ind., Hard Rock has been a home run

At first blush, Bristol, Virginia seems to have little in common with Gary, Indiana.

A Tazewell County, Virginia, farmer---who may be one of the last few Appalachian cowboys--- is preserving cowboy culture through his writing, …

BRISTOL, Va. — Hard Rock executives were strolling down State Street one day when they stopped in Southern Churn and tried fudge so good they …

A Bristol, Virginia man was killed in a car crash in Scott County, Virginia last Friday.

Those who knew him react to Bruton Smith's death

Mike Martin (left), Bristol, Virginia landfill collections manager, talks with members of the group touring the city of Bristol and the landfill.

Virginia Dels. Israel O'Quinn (left) and Will Wampler (right) speak during a meeting before the tour of the landfill.

Bristol Virginia Schools Superintendent Keith Perrigan talks to members of the tour group as they make a stop at Highland View Elementary School.

The Rev. Sam Weddington of First Presbyterian Church speaks before the tour of the Bristol, Virginia landfill on Tuesday.

Members of the group board a bus to tour parts of Bristol, Virginia and the landfill.

Members on the tour were taken back to the active part of the Bristol landfill on Tuesday.