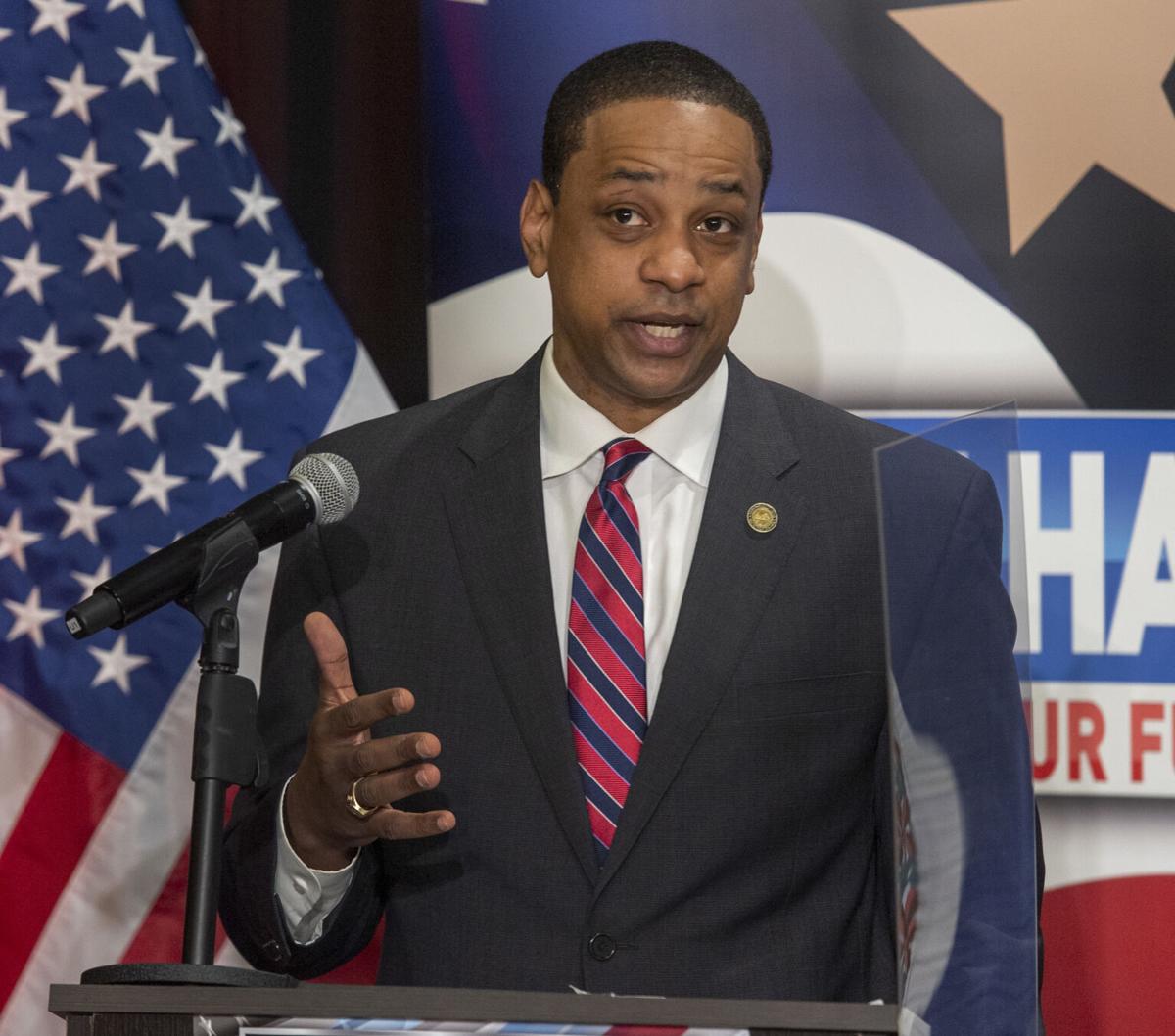 Democratic candidate for governor of Virginia Lt. Gov. Justin Fairfax answers a question during a debate held in Bristol, Virginia on Thursday. 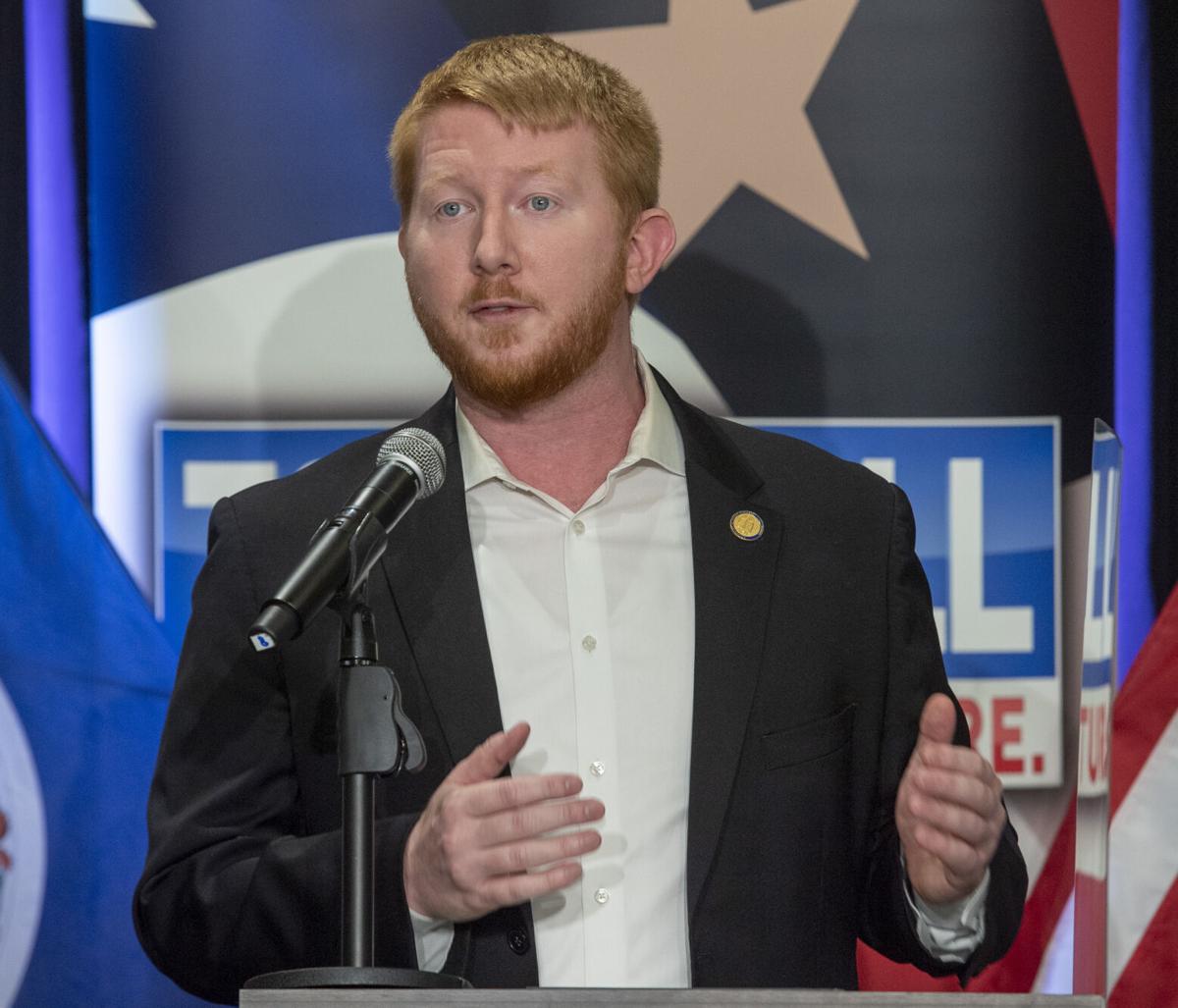 Democratic candidate for governor of Virginia Del. Lee Carter answers a question during a debate held in Bristol, Virginia on Thursday. 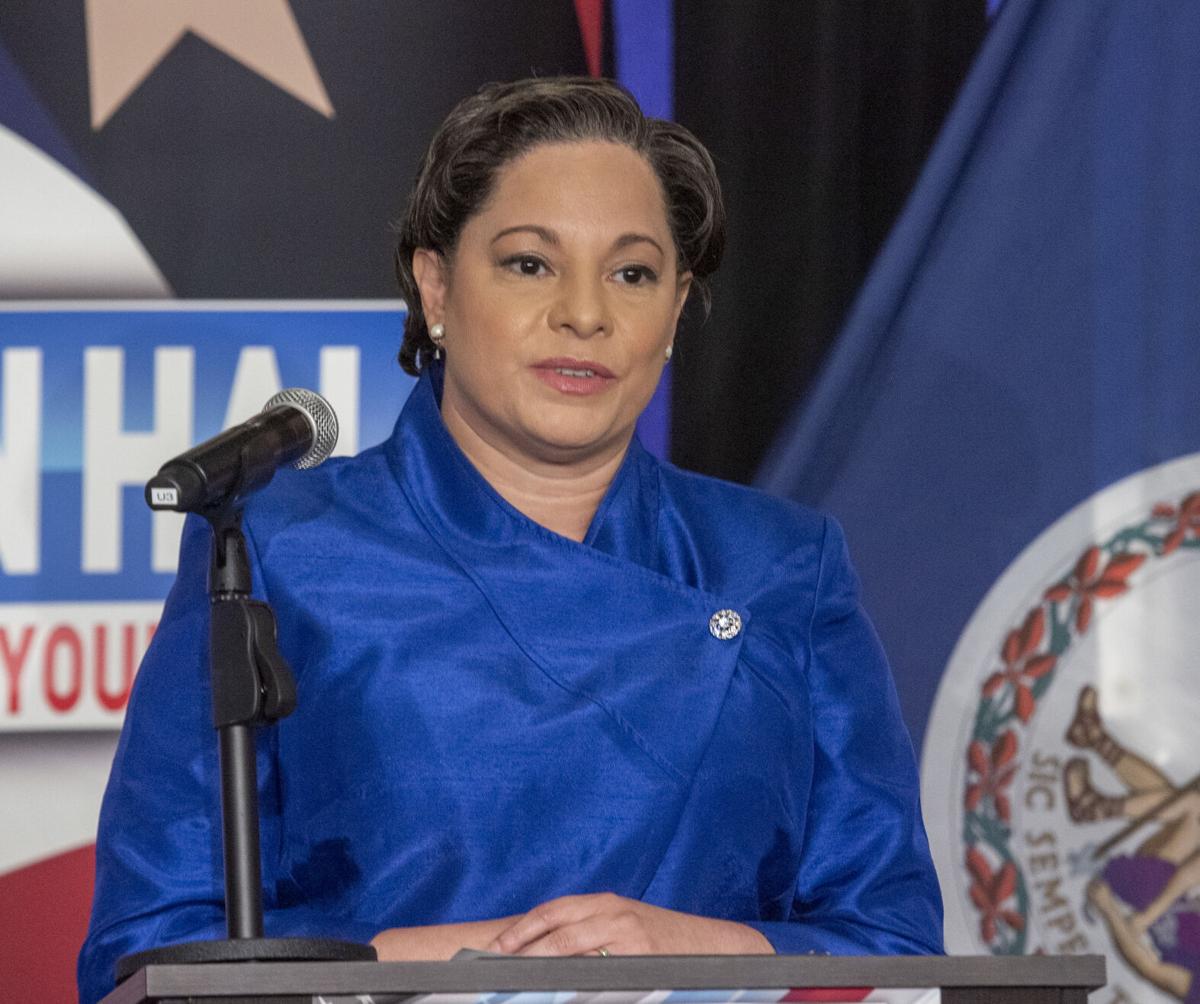 Democratic candidate for governor of Virginia state Sen. Jennifer McClellan answers a question during a debate held in Bristol, Virginia on Thursday. 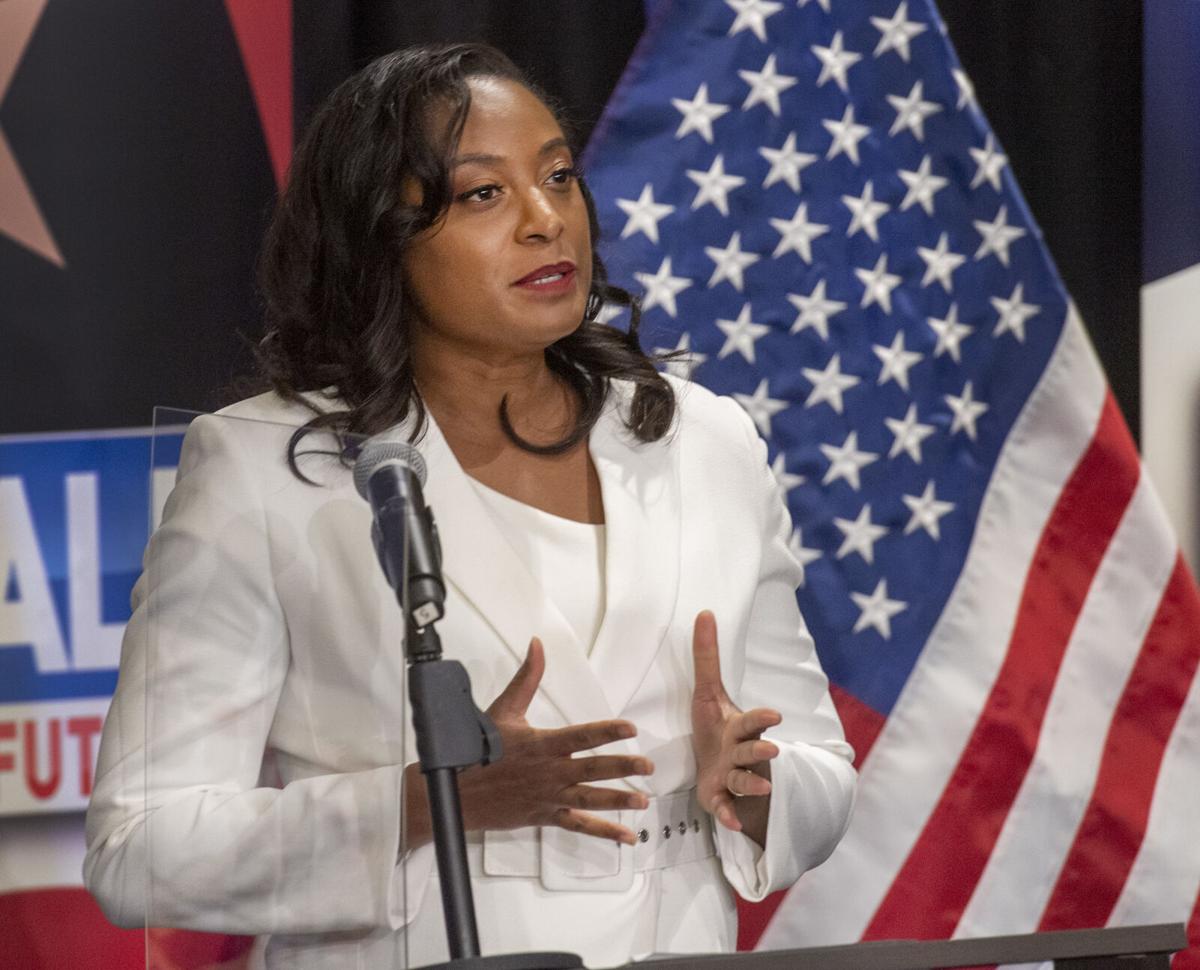 Democratic candidate for governor of Virginia former Del. Jennifer Carroll Foy answers a question during a debate held in Bristol, Virginia on Thursday.

Polls show McAuliffe has support from 42% to 47% of party voters in the June 8 primary, while the other four candidates’ support is in the single digits.

Carter repeatedly criticized government support for large corporations, singling out the deal that brought Amazon to Northern Virginia. The state committed $573 million in tax breaks, another $23 million in cash and $223 million in infrastructure improvements and other incentives through 2035 to bring Amazon’s HQ2 to Arlington. The state also pledged to spend $1.1 billion over 20 years to improve high-tech education.

Carter said his plan for economic growth was the only one that relied on a “fundamentally different model.”

“The other four candidates on this stage supported the Amazon deal that gives $1.8 billion of your money in cash, tax breaks and infrastructure upgrades to a corporation owned by the wealthiest man who has ever lived. I am the only candidate who would stop that corporate welfare.”

McAuliffe said, as governor, he wrote the bid that attracted Amazon to the commonwealth, winning out over 230 other cities.

“We’re talking 25,000 jobs with an average salary of $150,000. Not a penny of state money can be spent until we get the tax revenue in from the new jobs. That is a very good deal,” McAuliffe said. “These aren’t statistics. I’m talking about people’s lives. We’re lifting up families.”

Carroll Foy, who resigned her House seat to campaign for governor, repeatedly challenged McAuliffe’s actions as governor, saying he was out of touch with working Virginians and ignored the needs of the many.

Although standing next to him, the only time Carroll Foy looked at McAuliffe was during her closing remarks when she asked voters to choose her over McAuliffe.

“Terry McAuliffe talks about going big and bold, but, when he had his chance, he left most Virginians behind,” Carroll Foy said. “Your decision on June 8 is clear: either Virginia’s past or Virginia’s future.”

Sen. Jennifer McClellan, D-Richmond, poked at McAuliffe’s “big and bold” campaign themes while answering a question about education, saying, “We cannot have a bold education plan that does not address our school construction and modernization needs.”

For his part, McAuliffe continually touted his record of job creation, eliminating state debt and making improvements in education.

In their responses, all of the candidates expressed support for helping promote economic development for Southwest and rural Virginia, investing in school construction and teacher pay, addressing the opioid crisis and attracting green energy manufacturing jobs to the former coalfields region.

All promised to support expanding broadband.

“[There are] hundreds of thousands of Virginians who do not have access to high-speed internet and broadband. We need to invest even more than we have,” Lt. Gov. Justin Fairfax said, calling for more investment over the next four years and more public-private partnerships to expand service.

Carter suggested using the same approach for broadband as the push to provide electricity in the 20th century.

“We have been using this approach to broadband for decades, trying to incentivize private corporations and the big telecoms to do the right thing and provide that last-mile service, but we have not been able to get that service to every address,” Carter said. “The government needs to hire people to run the lines and then spin that infrastructure off to nonprofit entities like rural electric co-operatives and municipal utilities.”

“If we are going to close the digital divide before 2028, we first need to complete the work we are doing now, to identify the unserved and underserved areas and make sure we get them the speed they need by investing over $50 million a year into Virginia communications initiative,” McClellan said, “and work with our local governments to identify what is the right technology and what is the right model for their specific need.”

Carroll Foy pledged to put more money into the program and create “public-private partnerships so we can have virtual learning here in Virginia,” before speaking about the need for more education funding.

McAuliffe said only 51% of Virginia homes have access to broadband and said it should be available to everyone. He pledged to make that happen if elected.

When asked about passenger rail, all five pledged to support expanding rail service to Bristol and stressed the importance for more rail service in other parts of the state.

McAuliffe has outraised his nearest opponent, Carroll Foy, nearly three times over, raising $9.9 million with $8.5 million on hand entering the final weeks of the campaign, according to the Virginia Public Access Project. Carroll Foy has raised $3.7 million and reports $2.3 million on hand.

McClellan, who has served in the General Assembly for 15 years, raised $1.7 million and had $442,000 remaining after the last filing period, which ended March 31.

Early voting is underway for the Democratic primary and concludes June 5.

Republicans are expected to select their candidates for governor, lieutenant governor and attorney general on Saturday during a convention that includes meetings in 39 locations, due to COVID-19 restrictions, with over 53,000 delegates registered to vote.

BRISTOL, Va. — Cyber criminals conducted a ransomware attack on the Bristol Virginia Police Department’s computers earlier this year and now appear to be trying to sell information on the dark web.

Washington County School Board member Terry Fleenor announced his resignation late Sunday, nearly a week after a contentious board meeting that included discussion of transgender issues.

Michael Stout, a 33-year-veteran of the Bristol Virginia Sheriff’s Office, took the oath of office Friday to become the city’s next sheriff.

Ballad Health officials fret that hospital admissions are likely to soar in the coming weeks with the arrival of the COVID-19 delta variant, some 500 days after the pandemic first struck this region.

Moving Mountains: The Making of the Coalfields Expressway

A woman was arrested Thursday on a drug charge in Bluff City.

Bridging the $2.6 billion funding gap required to complete Virginia’s portion of the Coalfields Expressway might seem an impossible task, but don’t try telling that to lawmakers around these parts.

Fueled by the highly contagious delta variant, new cases of COVID-19 nearly doubled over the past week across 10 Northeast Tennessee counties when compared to the previous week.

Democratic candidate for governor of Virginia Lt. Gov. Justin Fairfax answers a question during a debate held in Bristol, Virginia on Thursday.

Democratic candidate for governor of Virginia Del. Lee Carter answers a question during a debate held in Bristol, Virginia on Thursday.

Democratic candidate for governor of Virginia state Sen. Jennifer McClellan answers a question during a debate held in Bristol, Virginia on Thursday.

Democratic candidate for governor of Virginia former Del. Jennifer Carroll Foy answers a question during a debate held in Bristol, Virginia on Thursday.