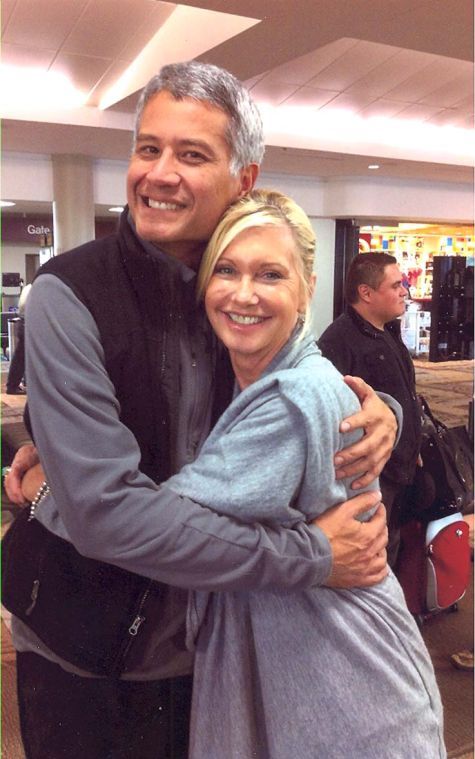 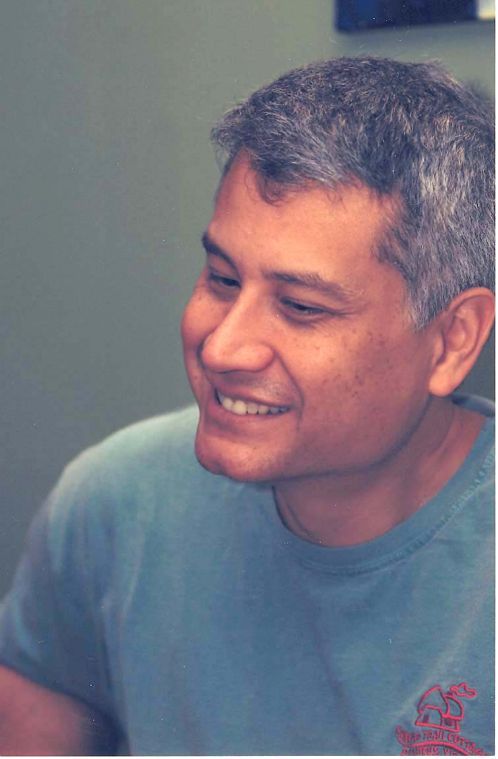 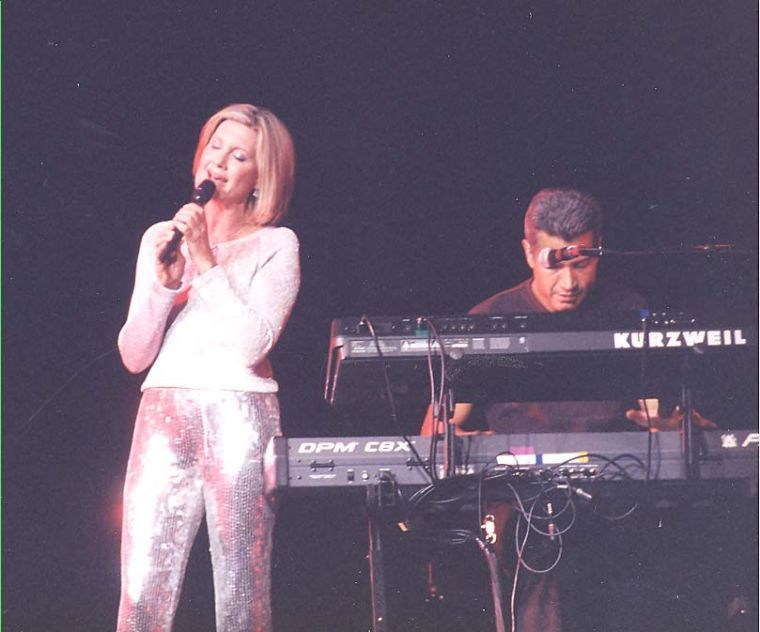 “She’s [Olivia Newton-John, left] an angel to work for,” said Dane Bryant, right, Newton-John's music director, from Las Vegas. “Every night is exciting because she emotes this genuine love.”

Like a map gradually plotted, his route in life began to take shape by age 5.

Commercial jingles including those for Winston cigarettes and Valleydale caught firmly upon Bryant’s young and developing ear for music.

“She’s an angel to work for,” said Bryant by phone recently from Las Vegas. “Every night is exciting because she emotes this genuine love.”

Applause fills the Flamingo like blood in the veins of the living. It’s all consuming.

Olivia Newton-John steps on stage. As the star of the riveting show, “Summer Nights,” all eyes seem penetrated upon the pop icon.

“From my side of the stage, I can see the faces of the audience,” Bryant said.

Mere feet away, he depresses the keys on his gleaming white grand piano with the care of an architect. Just so. Notes rings out and precisely within its place.

Brand Bryant an architect of sound.

“Gosh,” his father said from his and wife Sarah’s home in Bristol, Va., “I’m extremely proud. We’re proud of both of our sons. He called me one time and said, ‘oh, by the way, I was talking with Dolly Parton a while ago.’”

Bryant’s father is an avid and longtime fan of country music.

Bristol, Dane Bryant’s a big deal. As with any musician worth hard-earned quarters in jukeboxes, au-thenticity rates high in Bryant’s tuneful sky.

Consider Olivia Newton-John’s career. Born in England but reared in Australia, Newton-John first hit in 1971 with “If Not For You.” Several years of pop-country crossover success followed first with 1973’s “Let Me Be There.” Her biggest hit came via 1981’s pop-dance smash, “Physical.”

Now 65, Newton-John has battled breast cancer and won, loss of life in her family and persevered.

“Ninety minutes, five nights in a row, I don’t know how she does it,” Bryant said. “She still wears the same jacket she wore in ‘Grease.’”

As with her role opposite John Travolta in “Grease,” Newton-John’s show dazzles. Per her career, her show features more shifts than an earthquaking California fault line.

“We have a portion where we do a country medley, a jazz trio, a ‘Grease’ portion and an ’80s portion, too,” Bryant said. “They run a lot of video from those eras, and we have to sync the music to that because it’s not automated.”

“We did a lot of preparation in Nashville,” Bryant said. “Given that Olivia’s career spans four decades, it takes diverse musicians to play it. You have to find the right guys to do it.”

As with touring bands, shows are occasionally tinkered with in terms of song changes and pacing. Bryant checks with Newton-John after each show.

“Last night after the show, I went up to her and asked if there were any tweaks that we needed, and she said no,” Bryant said. “She looked at me and said, ‘are you happy?’”

Those three words signify the immense level of trust she has in Bryant to run her show.

“She genuinely cares,” he said. “You know, when I retired from Clint Black three years ago, I was done with live performing.”

Bryant had played piano in Black’s country band since 1992. Prior gigs include stints with Tanya Tucker, Linda Davis, Mavericks lead singer Raul Malo and a run with Olivia Newton-John.

“I’m proud of him for finding what he loves,” Bryant Sr. said.

That which Dane Bryant loves turned to studio work in recent years. He’s been busy. For instance, in November 2012 he produced a Christmas album, “Noel,” for country star Phil Vassar.

“I turned away from a lot of offers to tour after Clint,” Bryant said. “I didn’t want to tour anymore. I hadn’t played with Olivia for five years. I wanted to concentrate on recording and production work.”

So when a call came from Newton-John’s management with an offer to work with her during her run in Las Vegas, Bryant replied with reluctance.

Bryant replied with a sum that he thought was beyond what they would accept.

Bryant accepted, got to work hiring a band and then it was viva Las Vegas!

“It was a great wakeup call,” Bryant said. “I hadn’t realized how much I missed playing live.”

On a wall inside his home back in Nashville displays a note within a frame inside Bryant’s office. That note, which went undiscovered for about 30 years, arguably means as much to him as his treasured grand piano that also occupies space within his home.

Had it not been for one rather quietly vigilant and oh-so-believing music teacher at Bristol’s Virginia High School, Bryant may well be working on computers today as opposed to playing music in the bright lights, big city of Las Vegas.

Music became an obsession for Bryant.

“Music doesn’t come easy for anybody,” he said. “It’s about a hunger. It was an obsession for me.”

His music teacher at Virginia High took note of her musically obsessed pupil.

“Had it not been for Betty Layman, choral director at Virginia High, I would not be here in Las Vegas today,” Bryant said. “She saw that potential. She’s responsible for it all. She said, ‘you can do this.’ I’ll carry that to my grave.”

You see, Bryant’s route beyond high school was already in motion. Music was not on the map.

“Oh,” he said, “I was accepted into King College to do computer science. I was fine with that.”

Betty Layman was not fine with that. She knew that greatness lived within her young charge. Well, each day after school, Bryant practiced piano alone at school.

“Without my knowing, she stuck a cassette player behind the piano,” Bryant said. “She sent the cassette to James Madison University. One day I got a call from the jazz department at JMU. He said, ‘we want to get you up here.’”

Bryant was pleasantly shocked. Despite scratching his head a bit, he visited JMU and was accepted.

“I got back to Bristol, went to see her and she had this grin like the cat that ate the canary,” Bryant said.

Layman died some years ago. She’s buried at Glenwood Cemetery in Bristol, Tennessee.

“It’s the first place he goes to when he comes home,” Bill Bryant Sr. said.

Layman’s gravesite qualifies as sacred ground for her successful charge.

“Her grave now has a vase and flowers. Always,” Bryant said. “She’s in my heart. She’s an angel looking down on me. Every night.”

And days, from a frame upon a note dated 1978 that hangs in the office of the 1978 Virginia High School graduate.

“Dad was cleaning out the attic about seven or eight years ago and found a sealed letter from Betty Layman dated 1978,” Bryant said. “She wrote it to me for my graduation in 1978 from Virginia High School.”

He opened the letter. Just a few words emerged from within, written in his mentor’s hand. He read them and he cried. Still does sometimes when he reads those simple yet powerful words.

“She wrote, ‘Dane, once in a while there’s a student that comes along that makes this all worthwhile. Dane, you’re the reason why I teach,’” Bryant said, quoting the letter. “’Love, Betty Layman.’”

“She’s [Olivia Newton-John, left] an angel to work for,” said Dane Bryant, right, Newton-John's music director, from Las Vegas. “Every night is exciting because she emotes this genuine love.”