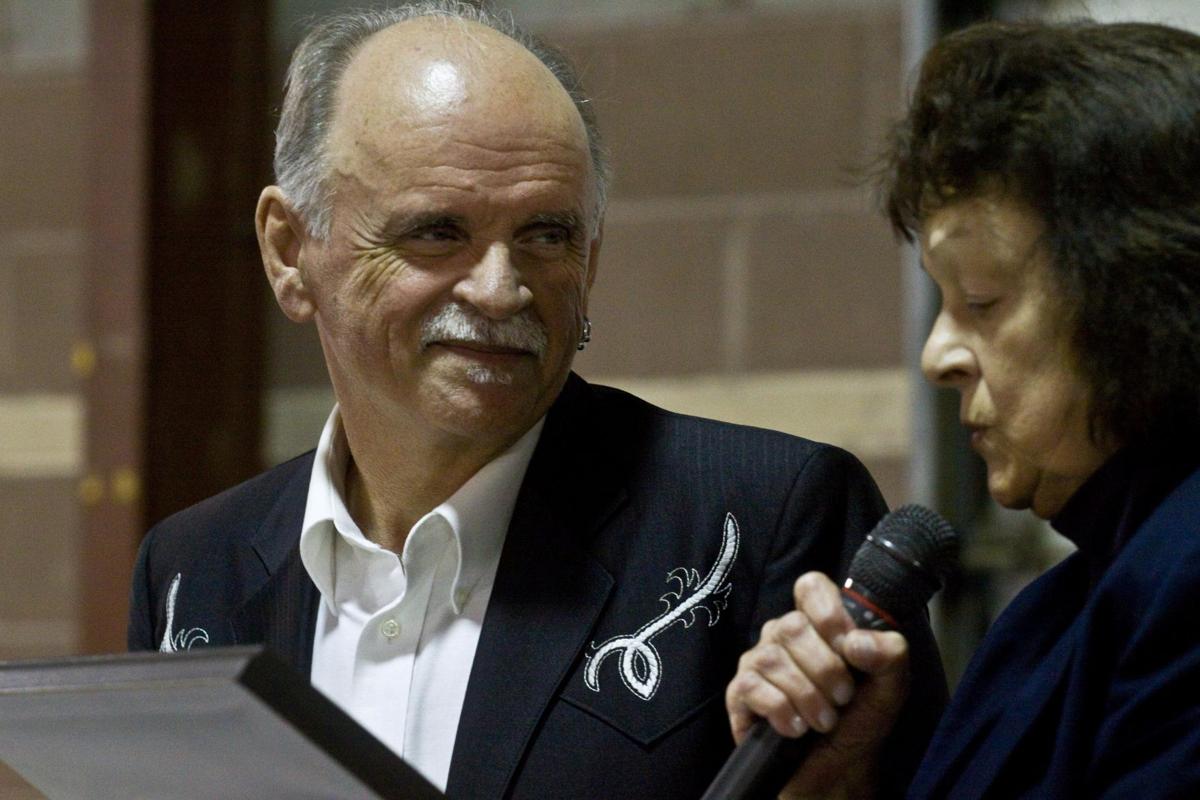 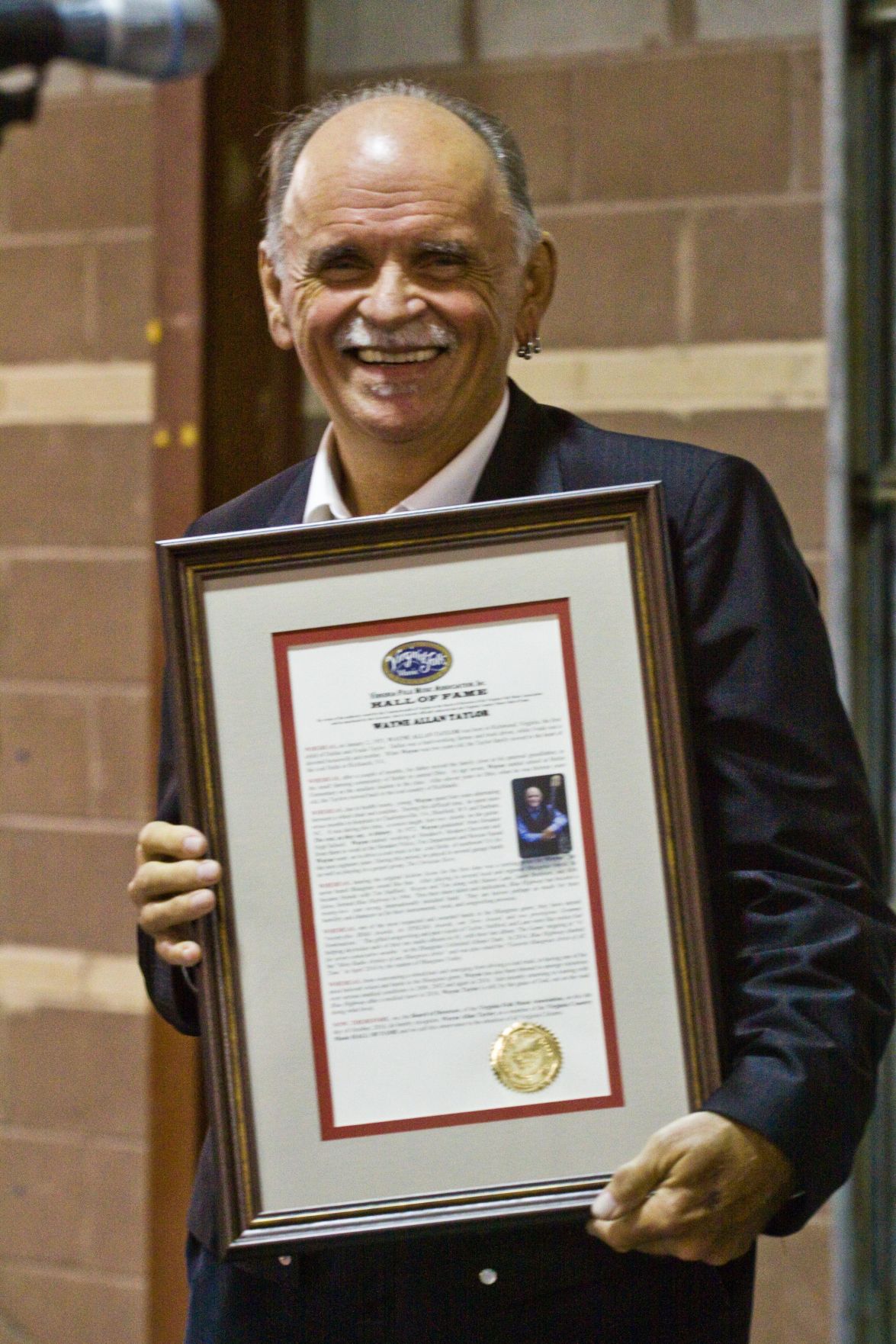 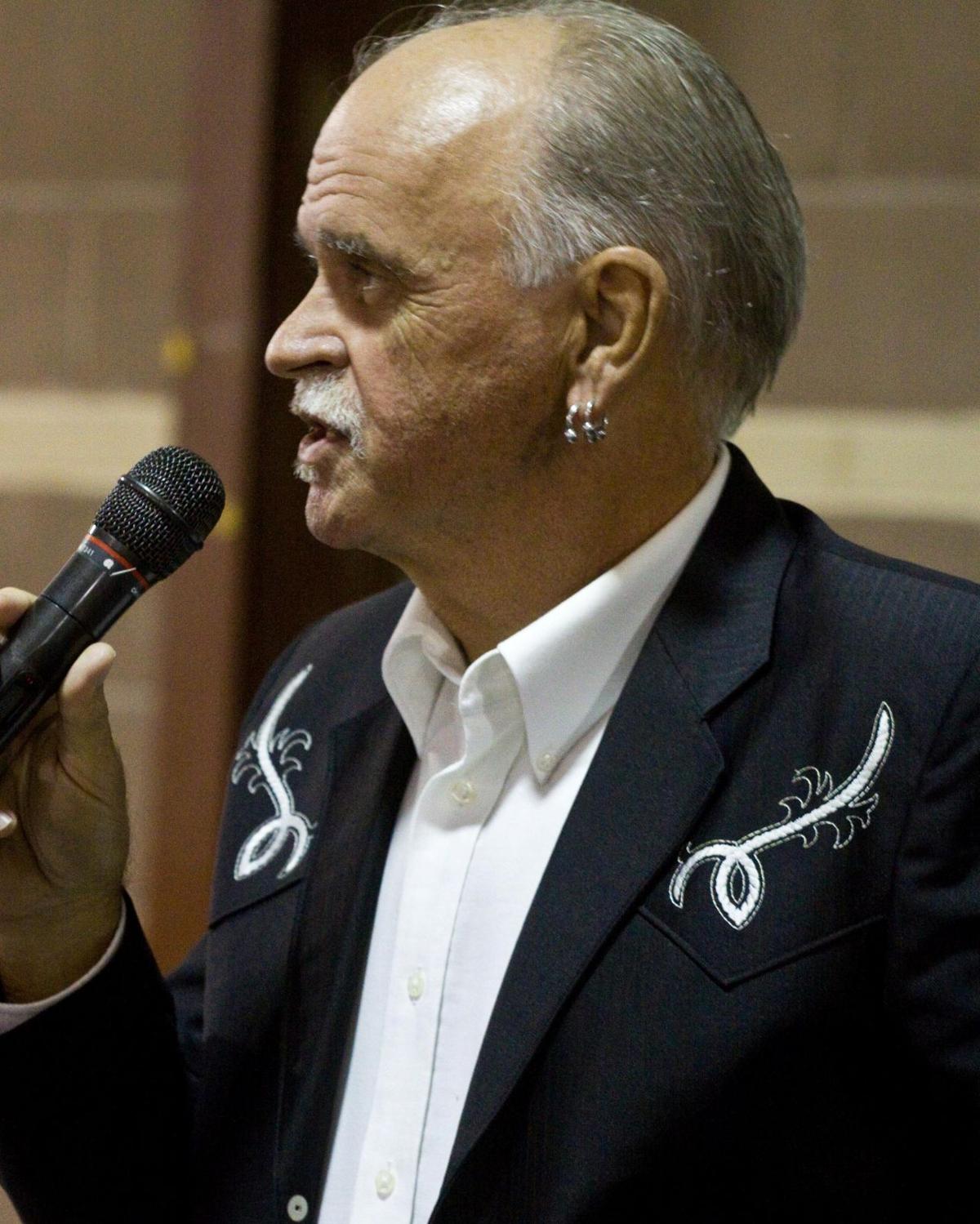 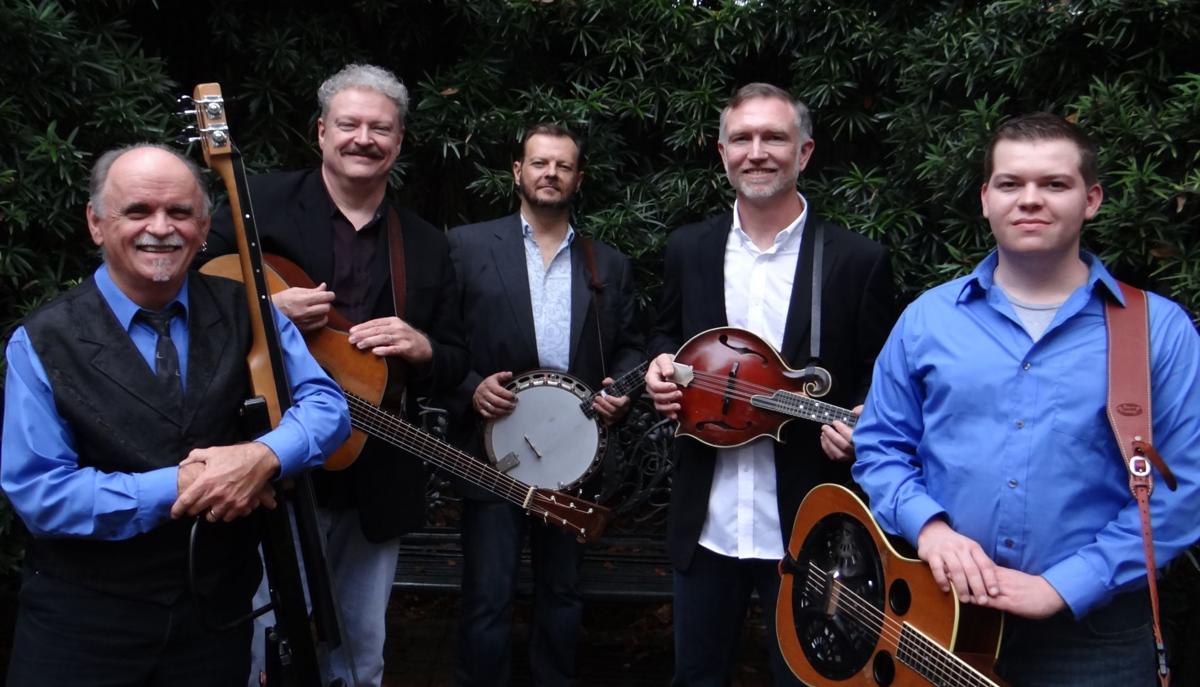 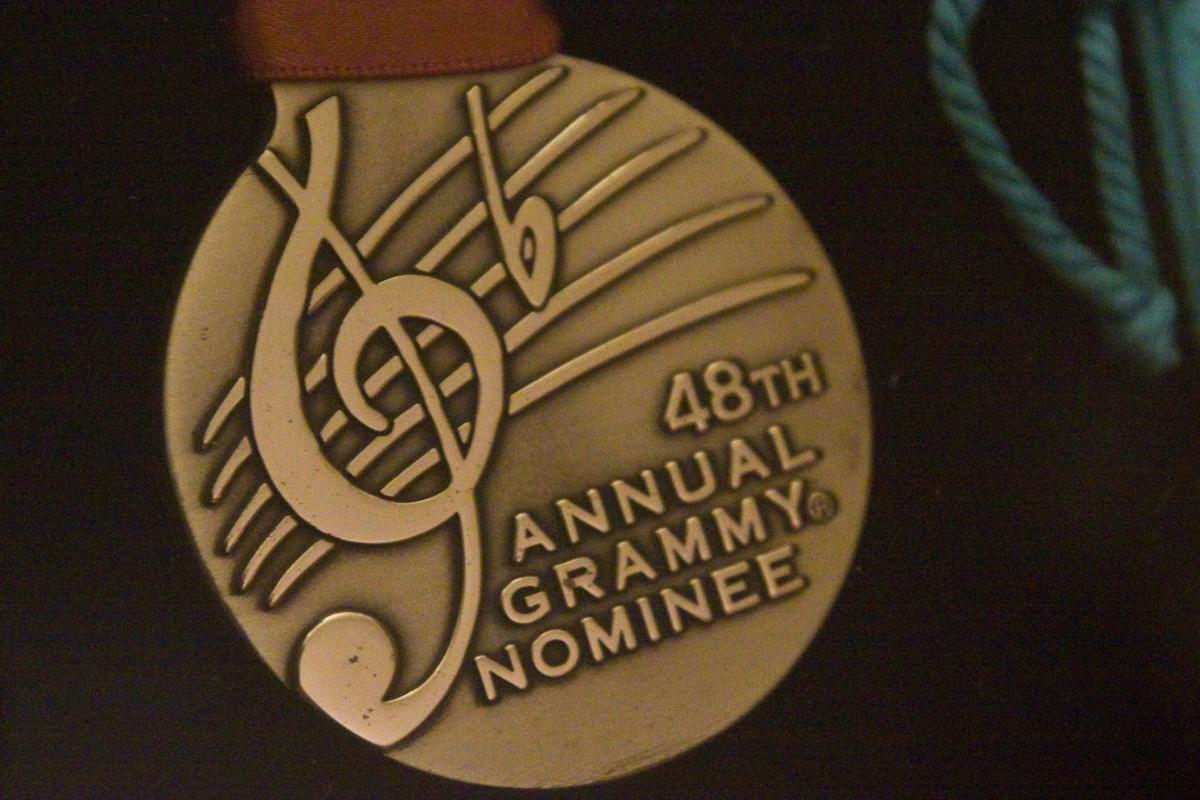 “Lonesome pine I can hear you calling,” Taylor sang during the song’s chorus, “calling me back to my home.”

From inside the cab of a coal truck to a seat at the Grammy Awards, Taylor’s journey through life brands as a whirlwind of improbability. He’s a “marvel,” said Blue Highway band mate Tim Stafford. From sever-al crippling years as a child to the newest member of the Virginia Coun-try Music Hall of Fame, Taylor’s life seems as unlikely as life itself.

“My life has been full of ups and downs,” said Taylor, a 1972 gradu-ate of Honaker High School.

Climb aboard a rollercoaster for a look into the life as led by Wayne Taylor of Bristol, Virginia.

Atop the ride, Blue Highway finds itself nominated for a Grammy in the Best Bluegrass Album category. Watch the show via CBS on Feb. 12. Amid the valley, obstacles waylaid Taylor near and long ago. Yet like a dream undeterred, he persevered.

“As a teenager from 13 to 17, I spent on crutches. I had osteopenia (a decrease in bone density),” Richmond-born Taylor said. “I spent time in the hospital at the University of Virginia when I broke my knee-cap. They did surgery. It got badly infected.”

What should have improved, worsened.

“When they took the cast off, you could literally see the bone,” Taylor said. “My mother asked the doctor, ‘can you save his leg?’ The doctor said, ‘I don’t know.’ I went from crutches to a wheelchair. I was in a wheelchair for two years.”

Taylor rebounded. Health issues, including scoliosis and cancer, fol-lowed as decades flew by. But Taylor’s a Ben Franklin man, a character written with a strong constitution. Early in life, Franklin flew a kite; Taylor drove a coal truck in Southwest Virginia.

“When I got back on my feet, I worked in the parts department at Mod-ern Chevrolet in Honaker [Virginia] for a while,” Taylor said. “Later worked as a dispatcher in Honaker. Then I drove a coal truck in Buchanan County for 18 years.”

On nights and weekends after muscling a coal truck along the snaking routes of mountainous Buchanan County, Virginia, Taylor sang. He applied his voice and upright bass talents to a string of bluegrass and gospel bands including the Christian Heirs, Black Diamond Edition, the Rich-lands Bluegrass Boys, the Bluegrass Kinsmen and the Tim Laughlin Band.

“The first time I ever saw Wayne was when he was in the Tim Laughlin Band in about 1992 or so,” said Tim Stafford, who co-founded Blue High-way with Taylor. “I was impressed with his bass playing. He wasn’t flashy, but he knew timing.”

By then Stafford, who won a Grammy as a member of Alison Krauss’ band Union Station, had left Union Station. He and Taylor met, discovered considerable common musical ground and devised a plan for a band.

“Tim and I talked about putting some local musicians together and just playing around home, maybe do an album,” Taylor said. “Shawn Lane was the first guy to come on board. Then Rob Ickes came on with us and then Jason Burleson. We didn’t come together with any kind of a plan.”

Blue Highway resulted as a band in 1994. Soon thereafter, Char-lottesville’s Rebel Records signed them to a recording contract.

“We went into the studio and cut the only 12 songs that we knew,” Taylor said.

A standard grew from among the 12. Taylor’s composition, “Lonesome Pine,” rests forever as the album’s second track and one of the Blue Highway’s signature songs.

“I wrote that before I was in Blue Highway,” he said. “The band I was in, the Richlands Bluegrass Boys, were doing a lot of cover songs. I thought, ‘that won’t get me anywhere.’ So, I wrote ‘Lonesome Pine.’ It was either the first or second song I ever wrote.”

Blue Highway’s first album, “It’s a Long, Long Road,” debuted in 1995. Bluegrass fans responded in wild fashion as the album rose to num-ber one and earned the band its first IBMA award for Album of the Year in 1996.

“That first album pretty much paved the way for everything else that happened since,” Taylor said.

Twenty-two years later, Taylor closed his eyes and sang “Lonesome Pine” on the rainy night in Virginia when he became a member of the Virginia Country Music Hall of Fame. By then, a year and a life had whisked by as if clinging to a Texas twister.

“Even now the memories linger, my mama’s smile so soft and warm…,” Taylor sang. “Lonesome pine calling me home.”

An ovation welcomed Taylor as he sang. He smiled through closed eyes amid the resonance of his bluegrass loving heart.

“I still can’t believe it,” Taylor said later that night as he car-ried his bass after the show.

Last week while seated in his living room in Bristol, Taylor recalled the call that initially invoked disbelief.

“When I got the call from a representative of the Virginia Folk Music Association, I thought someone was pranking me,” Taylor said. “To be in (the hall of fame) alongside Patsy Cline, Roy Clark, Jim & Jesse, Jimmy Dean, the Stanley Brothers — I can’t describe the feeling.”

He didn’t move while a twinkle of a star danced in his eyes. He’s 62. But when he cast a look across the room at the award on a wall, for a moment the child that he was returned for a blink of a moment.

“I’ve looked up there and thought, ‘I’m a member of the Virginia Country Music Hall of Fame,” he said. “It’s a huge honor.”

A comfy brown chair sits just below the framed declaration of Taylor’s induction. Almost exactly five months before he was cast into music im-mortality and while seated in that chair, Taylor’s heart betrayed him on May 11, 2016.

Heart attack. That earned Taylor quadruple bypass surgery on May 18.

“I remember the last show (before his heart attack) well,” Taylor said. “It was on May 8 in Harrisonburg, Virginia. It was a festival. I wasn’t feeling well at all. I came home and was having a lot of trouble with my back.”

Three months passed. Taylor returned to the stage and the road with Blue Highway in August. By then recording sessions for Blue Highway’s latest album, “Original Traditional,” were complete.

As distinctive as a baby’s cry, Taylor’s voice can transport listeners to times and places and people long gone by. For some, as when he emotes “Lonesome Pine,” they return home. For others, as when he sings Staf-ford’s “Some Day,” they look to heaven.

“In the stillness of the mountains, I will find sweet peace and rest,” Taylor sings on “Lonesome Pine. “Lonesome pine I can hear you calling, calling me back to my home.”

“His lead singing is a marvel,” Stafford said. “He has one of the most natural voices I’ve ever heard. It’s God given.”

Though worried about his voice in the aftermath of his heart attack, Taylor’s gift as with his heart recovered well. Trauma could not strike him down.

A Grammy may result.

“My God, if we bring a Grammy home, you talk about a pinch-me mo-ment,” Taylor said. “Is this really the life I’ve led? It’s the life you dream about having.”

Is bar soap as gross as some people say? Not really, and we're all covered with microbes anyway

Finally, an answer to a long-bubbling question: What works best — bar or liquid soap?

How to get rid of fruit flies

It's time to ban this annoying summer pest.

More than 900 people in 48 states have been infected with salmonella, and their illnesses are likely linked to backyard poultry, the CDC reported.

A new survey found that parents who are stressed by having to help their children with distance learning drink seven more drinks per month than parents who do not report feeling stressed.

How to take care of granite countertops

With proper care, granite countertops can last for decades making them well worth the investment. This durable and attractive surface can withstand most normal kitchen messes, but it is an absorbent material. A little TLC can protect your granite counters from scratches and stains.

As it turns out, some measures can more reliably predict the quality of a relationship than others.

The US has recorded more than 4.2 million coronavirus infections and 148,000 deaths since the pandemic began, and a leading expert says thousands more people could lose their lives in the coming months.