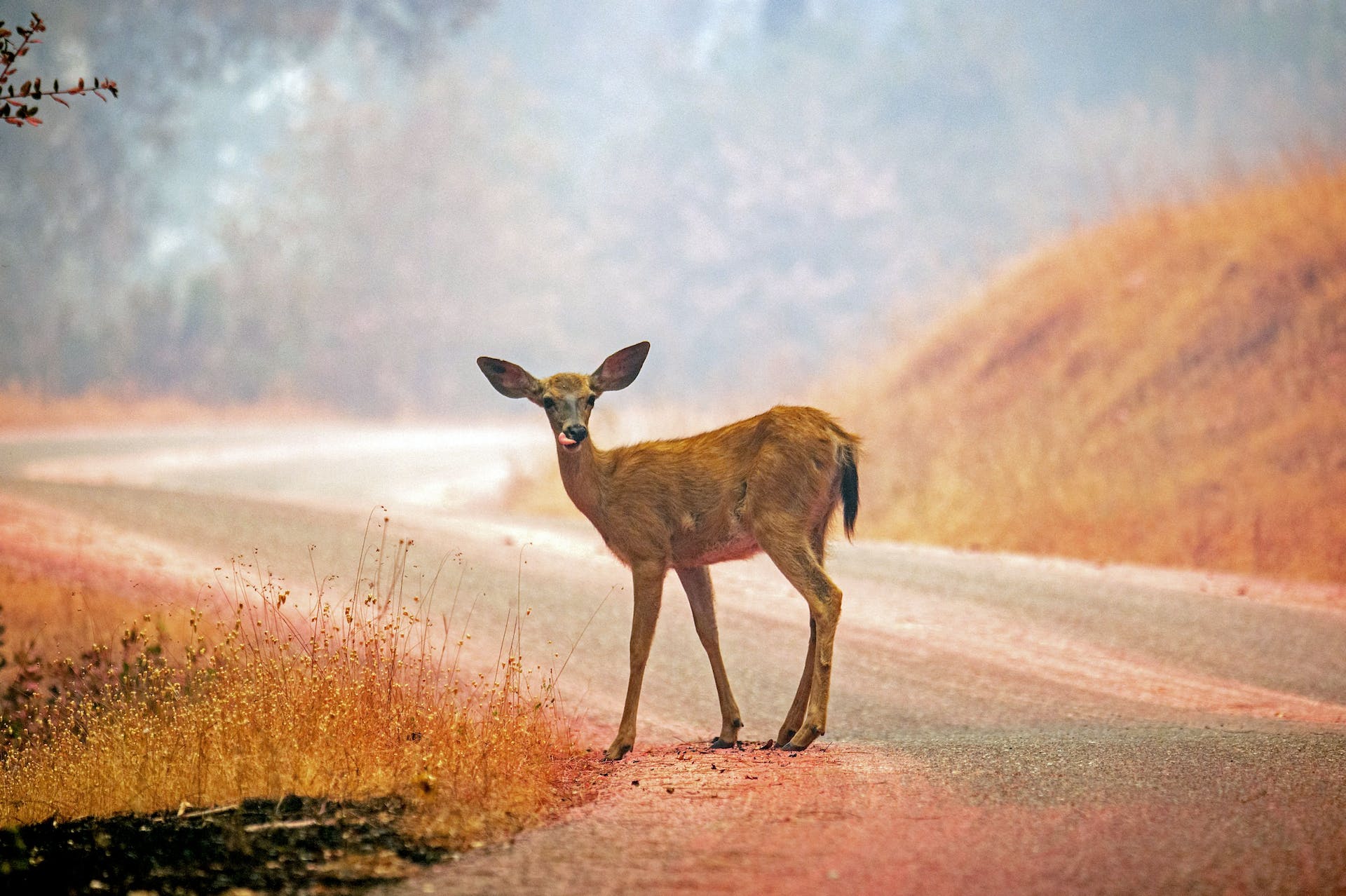 Deer cross roads whenever they wish, but some time periods are higher risk than others. Josh Edelson/AFP via Getty Images

Autumn is here starting Wednesday, and that means the risk of hitting deer on rural roads and highways is rising, especially around dusk and during a full moon.

Deer cause over 1 million motor vehicle accidents in the U.S. each year, resulting in more than US$1 billion in property damage, 200 human deaths and 29,000 serious injuries. Property damage insurance claims average around $2,600 per accident, and the overall average cost, including severe injuries or death, is over $6,000.

While avoiding deer – as well as moose, elk and other hoofed animals, known as ungulates – can seem impossible if you’re driving in rural areas, there are certain times and places that are most hazardous, and so warrant extra caution.

Transportation agencies, working with scientists, have been developing ways to predict where deer and other ungulates enter roads so they can post warning signs or install fencing or wildlife passages under or over the roadway. Just as important is knowing when these accidents occur.

My former students Victor Colino-Rabanal, Nimanthi Abeyrathna and I have analyzed over 86,000 deer-vehicle collisions involving white-tailed deer in New York state using police records over a three-year period. Here’s what our research and other studies show about timing and risk:

The risk of hitting a deer varies by time of day, day of the week, the monthly lunar cycle and seasons of the year.

These accident cycles are partly a function of driver behavior – they are highest when traffic is heavy, drivers are least alert and driving conditions are poorest for spotting animals. They are also affected by deer behavior. Not infrequently, deer-vehicle accidents involve multiple vehicles, as startled drivers swerve to miss a deer and collide with a vehicle in another lane, or they slam on the breaks and are rear-ended by the vehicle behind. 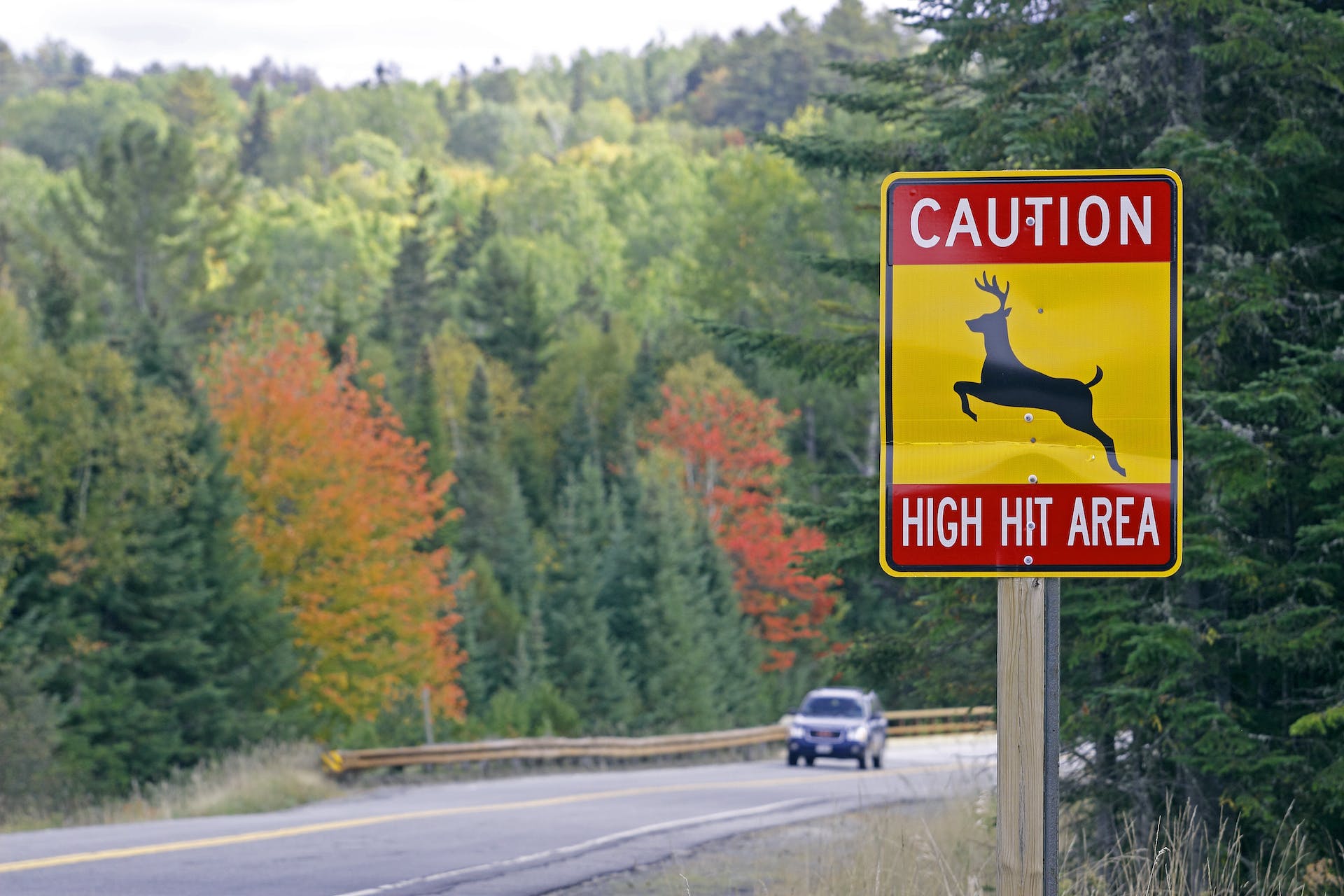 In analyzing thousands of deer-vehicle collisions, we found that these accidents occur most frequently at dusk and dawn, when deer are most active and drivers’ ability to spot them is poorest. Only about 20% of accidents occur during daylight hours. Deer-vehicle accidents are eight times more frequent per hour of dusk than daylight, and four times more frequent at dusk than after nightfall.

During the week, accidents occur most frequently on days that have the most drivers on the road at dawn or dusk, so they are associated with work commuter driving patterns and social factors such as Friday “date night” traffic.

Over the span of a month, the most deer-vehicle accidents occur during the full moon, and at the time of night that the moon is brightest. Deer move greater distances from cover and are more likely to enter roadways when there is more illumination at night. The pattern holds for deer and other ungulates in both North America and Europe.

That high-risk period is also when daylight saving time ends – it happens on Nov. 7, 2021, in the U.S. Shifting the clock one hour back means more commuters are on the road during the high-risk dusk hours. The result is more cars driving at the peak time of day and during the peak time of the year for deer-vehicle accidents.

Overall, given that most U.S. states and more than 70 countries have seasonal “daylight saving” clock shifts, elevated ungulate-vehicle accident rates caused by clock shift may be a widespread problem.

[Over 100,000 readers rely on The Conversation’s newsletter to understand the world. Sign up today.]

There is a longstanding debate about the benefit of a daylight saving clock shift, given how it disrupts humans’ circadian rhythms, causing short-term stress and fatigue. Risk of deer-vehicle accidents may be another reason to reconsider whether clock shifts are worthwhile.

It’s important to remember that deer-vehicle accidents can occur at any time of day or night, on any day of the year – and that deer can show up in urban areas as well as rural ones.

The insurance company State Farm found that on average, U.S. drivers have a 1 in 116 chance of hitting an animal, with much higher rates in states such as West Virginia, Montana and Pennsylvania. Over the 12 months ending in June 2020, State Farm counted 1.9 million insurance claims for collisions with wildlife nationwide. Around 90% of those involved deer.

Where deer or other ungulates are likely to be present, drivers should always be alert and cautious, especially at dawn, dusk, on bright moonlit nights and during the fall rut.

Tom Langen does not work for, consult, own shares in or receive funding from any company or organization that would benefit from this article, and has disclosed no relevant affiliations beyond their academic appointment.

States with the most motor vehicle deaths in 2020

States with the most motor vehicle deaths in 2020

Ivermectin has been lifesaving for people with parasitic infections like river blindness and strongyloidiasis. But taking it for COVID-19 may result in the opposite effect. Here's a brief history.

Scripture tells us to love God and love people. We do! But God loves people more than we ever could.

Pastor SCOTT SPENCE survived severe burns over 65% of his body; hear his story of perseverance Oct. 16 at Reynolds Memorial UMC

Hear pastor Scott Spence tell his story of perseverance at Reynolds Memorial United Methodist Church in Bristol, Virginia, on Saturday, Oct. 16. Presented by Celebration Women’s Ministry, the event is free and open to men and women.

Jesus meant all that he said, including (Matthew 5:48) “Be ye therefore perfect, even as your Father which is in heaven is perfect.” Perfectness is our birthright.

The Blind Boys of Alabama return to the Paramount Center for the Arts on Oct. 23

Today the world knows them as the Blind Boys of Alabama. Witness history when the legendary group returns to the Paramount Center for the Arts in Bristol, Tennessee, Saturday, Oct. 23.