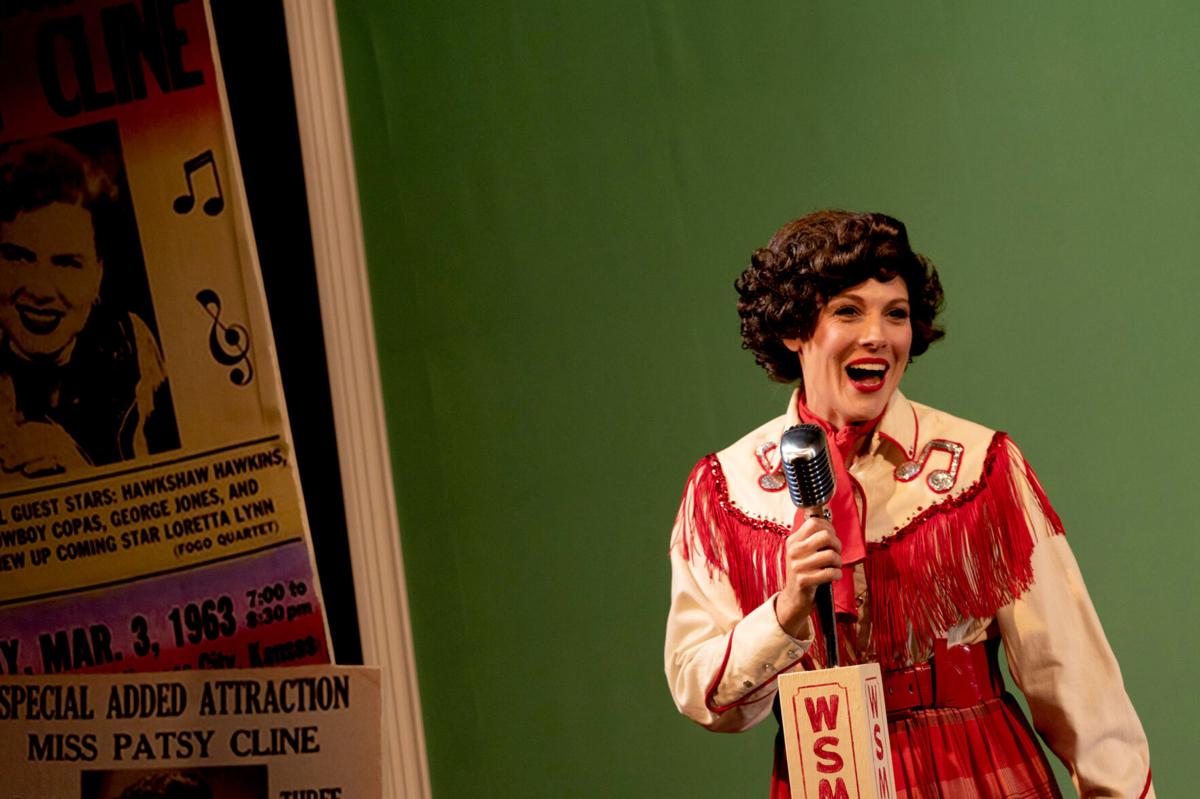 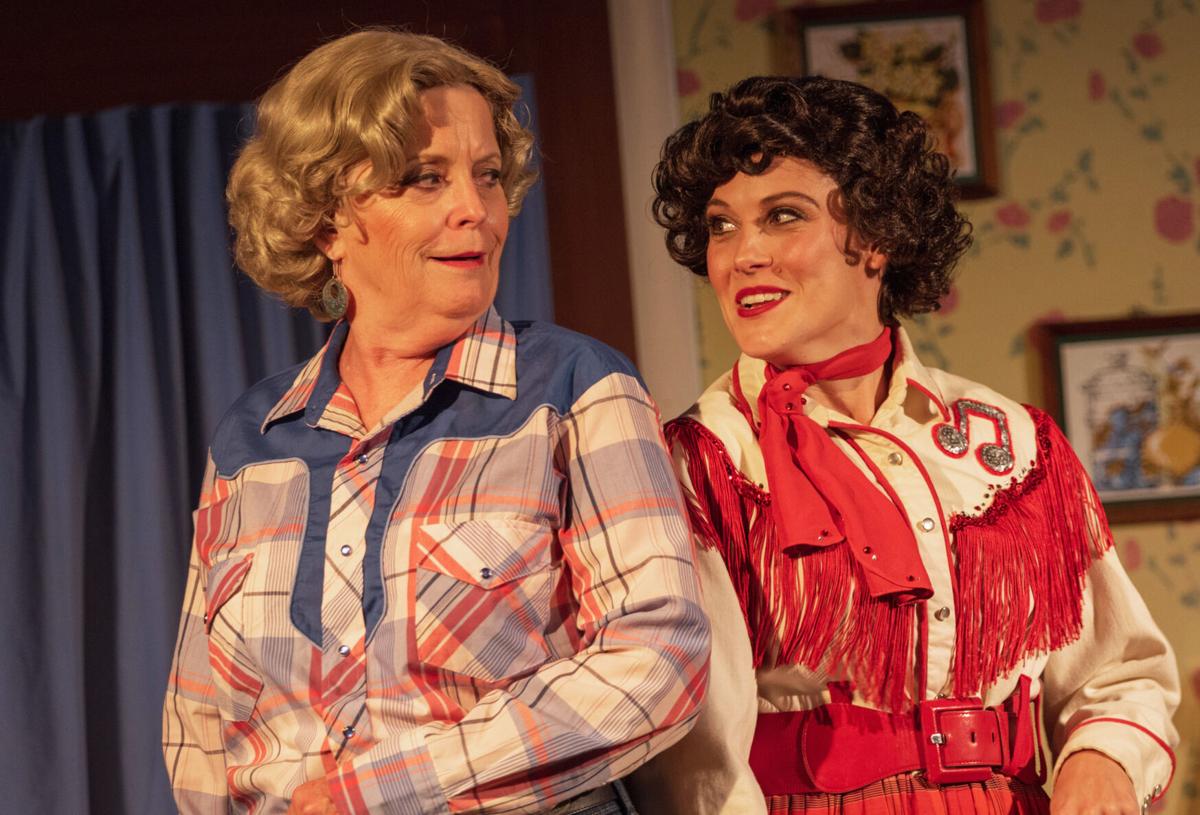 Tricia Matthews and Kim Morgan Dean star in the Barter production “Always … Patsy Cline.” Matthews plays a Patsy Cline fan-turned-friend in the musical, which is based on their letters to one another.

ABINGDON, Va. — If you close your eyes long enough, you may actually believe that country singer icon Patsy Cline is onstage in front of you.

Dean, a member of the theater’s resident acting company, performs as many as 20 of the artist’s songs under the stars in the sky onstage at Abingdon’s Moonlite Theatre.

“Always … Patsy Cline,” a tribute to the legendary country singer, plays Thursday through Sunday through July 10 at the drive-in venue, where audience members can watch the live performance in their cars or on the lawn.

According to Katy Brown, producing artistic director at Barter Theatre, the show is based on a true story about Cline’s friendship with a fan from Houston named Louise Seger, played by resident company actor Tricia Matthews. The fan befriended Cline in a Texas honky-tonk in 1961 and continued a correspondence with the star until her death. The star’s letters to Seger were signed, “Love, Always … Patsy Cline,” which became an inspiration for the title of the show.

“Kim has an incredible knowledge of Patsy’s stylings and the rich voice to back it up,” said Brown. “In addition to her voice, Kim also brings her truthful and grounded acting to the role — which just puts the whole thing on the next level.”

The musical features humor and emotion, along with many of Cline’s unforgettable hits, including “Crazy,” “I Fall to Pieces,” “Sweet Dreams” and “Walking After Midnight.”

If you didn’t know better, you might think Abingdon is an unlikely place for Dean, a native of Florida, to land a job.

At age 36, the young performer is no stranger to stardom.

Most recently, she was associate artistic director for Greenbrier Valley Theatre in Lewisburg, West Virginia, but before that she “did the New York thing,” cutting her teeth on opportunities unique to the Big Apple — some of them a little quirky, she said.

At a diner a block away from Radio City Music Hall, Dean changed out of her day clothes into a poodle skirt and sang 1950s and 1960s music.

“It was unlike anything I’ve ever done before,” said the artist.

“Sometimes, it meant you had a microphone tucked under your arm singing ‘Dancing Queen’ as you carried a tray of milkshakes to a table. You learned to multitask,” she laughed.

She’s also performed in an industrial commercial for the production company owned by NBC’s Al Roker and shot a commercial for a turkey company while kayaking on the Hudson River.

Relocating to Southwest Virginia is a pivot from having lived in New York, scrambling from job to job.

“As I get older, I’ve come to appreciate finding, cultivating and contributing to community,” said Dean, who lives in Abingdon.

“I feel a sense of community in a way that I’ve never experienced before. You go to the grocery store, and you’re probably going to see people you know, or you go to the farmers market, and you meet the people who grow your vegetables.

“It feels serendipitous to have ended up here, and I feel like this is where I’m supposed to be.”

Dean joined the Barter resident acting company in 2018, performing roles including Princess Fiona in “Shrek”; Kathy in “Singin’ in the Rain”; Truvy in “Steel Magnolias”; Susan in “Wait Until Dark”; and Judy in “White Christmas.”

She’s received numerous recognitions and awards for previous performances at other theaters, including the 2008 and 2009 Carbonell Best Supporting Actress Awards.

Recent Barter productions have been staged at the Moonlite because of the COVID-19 pandemic.

Dean said performing at the former drive-in theater is unlike anything she’s experienced — especially since she recently swallowed a bug while singing on the stage.

“Barter artists warned me there would come a time when I’d swallow a bug, and it finally happened,” said Dean. “That’s just one of the quirky little things that would never happen inside a theater. But we’re having a full experience out there.”

She thought it would take a while to get used to hearing no clapping from the audience during the shows.

Instead, audience members flash their vehicle lights and honk their horns during the performances to express their praise and appreciation.

“The first time I acted in front of cars, I felt like Springsteen at Central Park. There’s something about being in front of this acreage full of people leaning on horns and flashing lights. I’m like, ‘Is this how Beyoncé feels all the time?’”

Dean describes her work in the repertory theater as “the golden fleece of theater jobs.”

“I work with people who feel like family, and I get to do what I love. That’s pretty gratifying.”

Dean’s performance in “Always … Patsy Cline” has inspired her to appreciate the things that also were important to Cline.

The star had close ties to her family, and her roots for her home ran deep, said Dean, who has also relied on her family to survive the ups and downs of theater work.

As a child, Dean was encouraged to develop a passion for the arts by her aunt Joy, who lives in Florida. “I fell in love with it, and it’s never stopped.”

At age 4, she got a microphone for Christmas, and her obsession for singing began to blossom. Dean said her family still has a video recording of her singing the entire score to “Mary Poppins” at the top of her lungs in the living room.

It’s important to keep telling the stories about Cline, she said. She hopes people in the audience leave with a greater appreciation for the artist and the kind and generous person she strived to be.

“On all accounts, Patsy Cline was just the person who you’d want to sit down with and enjoy a beer. I wish I could hang out with her.”

The Barter actor said she never tires of listening to Cline’s songs. “It’s such a thrill to tell her story and to sing her music.”

“Hmm … that’s like picking your favorite child,” she said with laughter. “I love ‘Sweet Dreams.’ There’s just something about that song.”

Dean also will perform in the Barter Theatre’s upcoming musical “Doo-Wop at the Drive-In,” playing July 16 through Aug. 7.

Tickets are on sale now and can be purchased online at www.bartertheatre.com or by calling the Barter box office 276-628-3991.

You can rent ‘Home Alone’ house on Airbnb, complete with booby traps and holiday decorations

This holiday season, you can recreate your favorite “Home Alone” scenes by booking the Illinois house featured in the film for one night only on Airbnb.

Dwayne "The Rock" Johnson recently created an unforgettable moment for one special, and deserving, fan.

REVIEW: Lady Gaga shines in a knockoff 'House of Gucci'

In the process of creating his version of “The Godfather,” director Ridley Scott uncovers something completely different from “House of Gucci”: The Lady Gaga Brand.

The erasure is yet another time the Simpsons predicted the future.

Outside was a treat during the pandemic, and “Where the Deer and the Antelope Play” by Nick Offerman is too.

This Thanksgiving weekend is offering a box office feast with two genres that have been lacking on the menu so far this year: family movies and non-franchise films aimed at adults.

Supply-chain woes are this year's Grinch. But TV is overstocked with holiday specials and rom-coms — including the Food Network's first movie and the rebranded GAC Family channel's Christmas debut.

The secrets to winning the Great Christmas Light Fight

When contestants discover they’ve won “The Great Christmas Light Fight,” they’re not pining to see that “bag of money,” as host Carter Oosterhouse puts it. “They want the trophy.”

Rockefeller Christmas tree lighting set for Wednesday evening: Your guide to the event

Here's a quick look at how to watch the tree lighting as well as some fun facts about the tree.

An appreciation: Perfectionist. Genius. Icon. That was Stephen Sondheim

The theatrical giant, who died Friday at 91, was as complex as his lyrics, dogmatic in his rules and not generous with praise about his work.

Tricia Matthews and Kim Morgan Dean star in the Barter production “Always … Patsy Cline.” Matthews plays a Patsy Cline fan-turned-friend in the musical, which is based on their letters to one another.