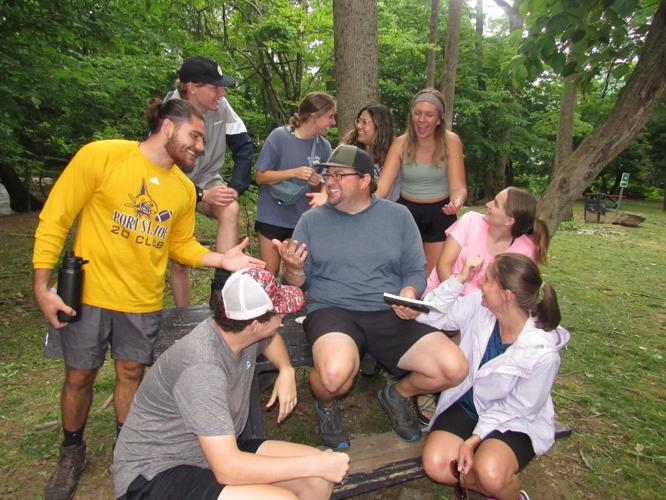 Brad Sasser (middle, in dark gray), also known by his trail name “Shep,” gave up positions as an accountant and youth pastor to become a trail chaplain for hikers on the Appalachian Trail. Sasser travels between stops along the trail to minister to the physical and spiritual needs of hikers, and he plans to open a ministry center in the trail town of Damascus, Virginia. 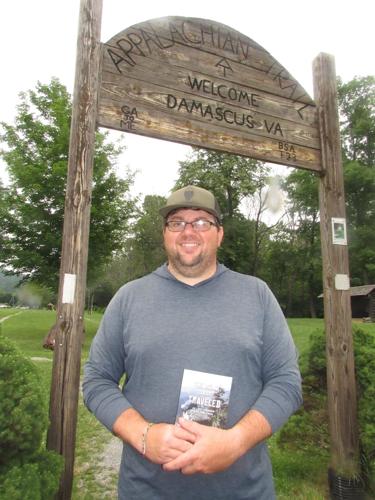 Sasser holds his book, “The Road Less Traveled,” at the Damascus entry to the Appalachian Trail. The book catalogs some of his experiences as a trail chaplain and offers life lessons he has learned through his ministry.

DAMASCUS, Va. — Brad Sasser’s idea of ministering to people may be a little different from most pastors.

Three years ago, Sasser traded his pulpit for a different mission field, one that’s among the towering evergreen trees and majestic waterfalls along the footpaths of the Appalachian Trail.

Sasser, 41, is a Christian outdoor chaplain on the trail, based with his wife and two teenage children in Shady Grove, Tennessee, only 15 minutes from the trail town of Damascus.

“We serve and bless hikers. That’s what we do,” said Sasser, who is a chaplain for the Assemblies of God U.S. Missions, a nonprofit missions organization, reaching people who have never walked into a church.

Sasser and his family reside in a camper in Shady Grove from spring through early fall and return to their home in Louisville, Alabama, for the winter, where they minister to hikers from the Big Cypress National Preserve near the Everglades to Pensacola Beach in Florida.

The chaplain is the author of “The Road Less Traveled: 23 Life Lessons from the Trail,” a book released in March, which is a compilation of stories from the last three years of his ministry, along with spiritual implications each story carries for our everyday lives.

The book is intended to bring greater awareness to the role of chaplains on the AT, as well as to raise funds for the support of his chaplain program, said Sasser, whose trail name is “Shep,” short for Shepherd.

Chaplains have been serving hikers on the trail for years.

“We want to add value to someone’s trip. That opens doors for us to minister to people in different avenues of their lives. We don’t beat people up with the Bible,” he said.

The chaplain travels the Appalachian Trail, sometimes on foot and other times in his Ford F-150 with a portable grill, setting up at road crossings, where he provides meals of hamburgers and hot dogs, chips, drinks and other trail paraphernalia like socks and bandages.

He sometimes comes across fruit markets in Pennsylvania and purchases fresh fruits to serve the hikers.

“They can easily get a Snickers bar, but they can’t find fresh plums, kiwi and watermelons while hiking.

“We call the meals ‘trail magic’ or ‘trail blessings,’” he said.

Under his ministry Trail Servants, Sasser meets dozens of hikers during each of his trail adventures, hanging out with them and hearing their stories. He also prays with them.

“For most people, there’s a reason they wake up and decide to hike 2,200 miles on the Appalachian Trail. They’ve lost a husband, they’ve lost a wife, they’ve lost their jobs or sold their houses. We hear all of these stories, and we’re able to minister to people with various backgrounds,” he said.

“Just yesterday, I met a young man who had cared for his mother for the past 10 years until she recently passed away. He wanted to do something for himself, and a friend told him about the AT.”

It’s the relationships he builds along the trail that best reward the chaplain.

He often drives to other states and tent camps along the trail, which runs from Georgia to Maine. He’s able to build a rapport with some of the same hikers by visiting with them at various spots along the trail in places like Virginia, Pennsylvania, Massachusetts, Vermont and Maine.

His family travels with him during the camping trips, seeing new places and meeting new faces along the way.

It’s been a total lifestyle change for the family of four. Lane is 15, and Meredith is 13, both of whom are home-schooled by their mother Michelle.

“He’s had wild ideas before, but this one felt right,” said Michelle about her husband.

“It just felt like what we’re supposed to do,” she said, describing the lifestyle as a ministry that sometimes presents challenges and everyday adventures with two teenagers and two dogs.

“We experience new things every day. You never know what’s going to happen when you wake up in the morning,” said their son.

‘What I’ve been put here to do’

Becoming a trail chaplain was, perhaps, one of the easiest decisions Sasser had to make.

While a youth pastor at Bethel Assembly of God in Alabama, he hiked a section of the Appalachian Trail, witnessing the spiritual needs of hikers he met on the trail.

Unhappy with the sedentary lifestyle as an accountant “stuck in a cubicle all of the time,” Sasser took a leap of faith in 2019 and quit his job, sold his house and accepted a full-time, paid position as trail chaplain — an opportunity to share the Gospel and to see breathtaking scenery that most people only dream about.

“I took a huge pay cut, but I felt like this is what I’ve been put here to do,” Sasser said. “To do anything other than what you’re called to do is a horrible life. Even if you’re successful, in my opinion, you fail.”

Allowed to set up anywhere on the Appalachian Trail, Sasser and his family checked out different trail towns, agreeing that Damascus was the one that felt like home.

By the Fourth of July, the trail chaplain and his family typically are camping around the Pennsylvania area, but this year, a special project is keeping them close to Damascus.

By the time Trail Days arrives next year, Sasser hopes to have a hiker ministry center constructed on his property in Shady Valley, along with a gazebo for hammock campers and bunk housing for nearly a dozen hikers. In addition, he is building a small cabin where he and his family will reside.

“It will be a blessing to have a space devoted to serving hikers in Southwest Virginia and East Tennessee,” he said.

Earlier this week, Sasser and his family welcomed students from Southeastern University in Lakeland, Florida, who made the trip to the region to help with the beginning stages of the hiker ministry center.

Sasser said the chapters in his book “The Road Less Traveled” are more like life lessons.

His favorite lesson in the book is when you’re blown off course.

Citing an example, Sasser told of an occasion when he and his family missed the opportunity to set up their trail blessings at a favorite spot in the Shenandoah National Park. Instead, they were forced to move to a less-than-favorable location that offered no cell service and no bathrooms.

“We were all begrudging this spot we had to settle for,” said Sasser.

“Then, here comes a young woman out of the woods, bawling, crying when she sees us. She was from Germany and very homesick. She had never camped before.”

Sasser and his family prayed with and talked to her after giving her fresh fruit and water.

“The lesson is if I had been where I wanted to be, I would have missed helping her. Sometimes in life, we get off course, but we’re actually where God wants us to be,” said Sasser.

He later learned that the young woman ended up going on and finishing the hike.

It takes thousands of dollars to keep the wheels of the program rolling, said Sasser. In an effort to support his Trail Servants program, the chaplain spends some of his time participating in church revivals and other church events in Alabama, telling audiences about his work and asking for donations.

He already has plans to start another book, which also will help with funding the self-supportive ministry.

Sasser’s book “The Road Less Traveled” can be purchased locally at Discover Damascus at 128 E. Laurel Ave. in Damascus or online at www.amazon.com and www.barnesandnoble.com.

Brad Sasser (middle, in dark gray), also known by his trail name “Shep,” gave up positions as an accountant and youth pastor to become a trail chaplain for hikers on the Appalachian Trail. Sasser travels between stops along the trail to minister to the physical and spiritual needs of hikers, and he plans to open a ministry center in the trail town of Damascus, Virginia.

Sasser holds his book, “The Road Less Traveled,” at the Damascus entry to the Appalachian Trail. The book catalogs some of his experiences as a trail chaplain and offers life lessons he has learned through his ministry.